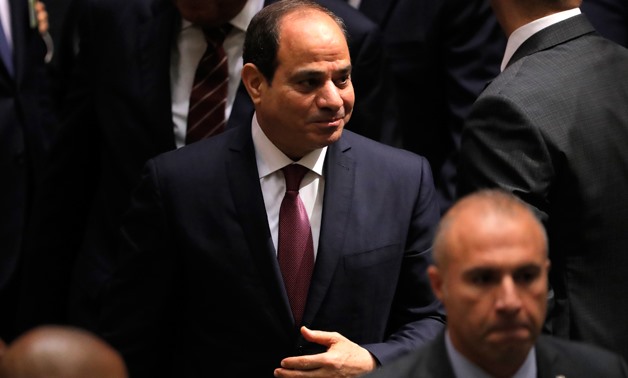 For the first time in its history, a non-European head of state attended the conference’s main session since President Sisi attended as AU chair.

President Sisi held meetings with the G7 summit leaders in Biarritz during which he discussed key issues in Africa and the Middle East.

A number of economic and investment agreements were signed paving the way for a strategic partnership between Russia and Africa. Russian President Vladimir Putin and President Sisi agreed to hold the summit every three years by rotation among Russia and African states.

The president presented to the leaders of 37 countries attending the summit, along with senior international officials, the vision of Egypt concerning partnership between the two sides and the current challenges.

The president also stressed the joint responsibility in fighting against terrorism and countering extremist ideology. He highlighted Africa's right in a fair economic partnership, stressing that the African continent is qualified to receive investments, especially in the field of infrastructure.

Sisi held two collective summits on the sidelines of the G20 meetings, the first of which was a Chinese-African five-nation summit, which brought together Chinese President Xi Jinping, South African President Cyril Ramaphosa, Senegalese President Macky Sall, and Secretary-General of the United Nations Antonio Guterres.

The second was a tripartite African summit that brought President Sisi together with the presidents of South Africa and Senegal.

“Development in Africa will have its impact on the Mediterrenean region and will achieve mutual interests,” President Abdel Fatah al-Sisi said in his speech at the opening of the G20-Initiative Compact with Africa (CwA) held in Germany Tuesday.

“As protectionism is ascending and slowdown of global trade is arising, African states are likely to suffer the most, particularly in light of problems like debts, poverty, climate change, and diseases. Africa’s location, resources, continental free trade agreement, and rise of intra-continental trade still make it an attractive investment destination,” President Sisi stressed.

The 7th Tokyo International Conference on Africa's Development (TICAD) has resulted in a three-year joint cooperative plan between African and Japan, President Sisi said in the conclusion secession of TICAD Summit on Friday in the Japanese city of Yokohama.

The plan aims to achieve the aspirations of stability, peace, modernization and prosperity, besides addressing the challenges facing African people, President sisi added, saying “The 7th TICAD Summit is an important turning point in promoting cooperation between the African Union and Japan.”


President Sisi said that the summit shed light on African countries, whose youth make up about 65 percent of the whole African population.

President Sisi affirmed to partners that the continent has adopted a long way of economic and political reforms, calling on the international investors and partners to cooperate with African countries to transfer their knowledge to the Africans, modernize industrialization system, develop the infrastructure and technology, and to establish a digital economy.

“I would like re-invite all Japanese private sector companies and international companies and international financial institutions to cooperate and invest in Africa. The right time has come to open up to the continent.The African markets are open and the investment climate ready for cooperation with all partners,” said President Sisi, thanking Japanese people and government for the TICAD summit.