By: Egypt Today staff
CAIRO – 8 January 2020: Egyptian President Abdel Fattah al-Sisi on Wednesday met with French Foreign Minister Jean-Yves Le Drian in Cairo, where they agreed to consolidate joint efforts between the two countries to reach settlement in Libya, the Egyptian Presidency said in a statement.

The two sides agreed on the need for a comprehensive political settlement in Libya, which would back state institutions and national army against terrorism and armed militias, in an effort to achieve security and stability, meet the aspiration of the Libyan people, and curb foreign interference in the war-torn country.

During the meeting, Sisi and Le Drian discussed some regional issues of mutual concern. They reviewed recent developments in the Gulf, and agreed on the need to continue coordination in an effort to achieve security of the Gulf.

The French minister affirmed his country's appreciation for the close and special relations with Egypt, considering the African country one of the pillars of stability in the Middle East region. He stressed keenness to support bilateral relations, in a manner that ensures strengthening of the existing partnership.

Late in December, Sisi affirmed the need to curb illegitimate foreign intervention in Libya, in a phone call with Macron, according to Egyptian presidential spokesman Bassam Radi. 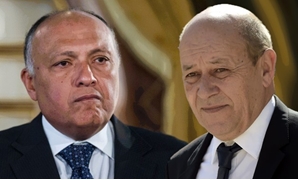