President Abdel Fattah el-Sisi participates in the first day of the Aswan Forum, December 11th - Courtesy of the Presidency

By: Amr Mohamed Kandil
CAIRO – 12 December 2019: Egyptian President Abdel Fattah el-Sisi hailed the role played by the Egyptian women, who he said “tasked themselves” to take part in the June 30 revolution in 2013, which ousted former President Mohamed Morsi, also leader of the now-outlawed Muslim Brotherhood group.

During his speech at a session dubbed "To enhance the role of African women to achieve peace, security and development," as part of the second day of the Aswan Forum held in Egypt, Sisi said millions of Egyptian women took to streets during the June 30 revolution to protect the Egyptian identity. 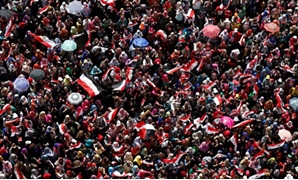