By: Noha El Tawil
CAIRO - 12 December 2019: President Abdel Fatah al-Sisi received on Tuesday his South African counterpart Cyril Ramaphosa in Ittihadiya presidential palace as they agreed to convene the joint committee in the first quarter of 2020 with the aim of boosting bilateral relations in the sectors of politics, economy, security, academia, culture and tourism.

“President Sisi expressed his appreciation for the historic and brotherly relations between Egypt and South Africa, and that date back to anti-colonialism endeavors and struggle for independence. At the time, Egypt was honored to host great South African leader Nelson Mandela in Cairo in the sixties. Later on, ties persisted during democartic transition in the nineties and until present,” the statement released by President's Spokesperson Bassam Rady read. Mandela visited Egypt in 1962 as an anti-apartheid revolutionary and again in 1997 as president of South Africa.

In a joint press conference, the South African president stated that the talks with his Egyptian counterpart were characterized by “transparency.” “South African people will always appreciate the Egyptian support to their country, particularly in time of struggle against colonization, and the great reception of leader Nelson Mandela,” Ramaphosa said.

The South African president declared that he had agreed with President Sisi to reinforce economic cooperation by boosting partnerships between the investors of both countries. Ramaphosa affirmed that the low level of current economic ties can be remedied, and that AfCFTA will help achieve that goal.

“We exchanged views on African peace and security... We have concerns over threats facing some African and Gulf states... We expressed commitment to the 2020 Silencing the Guns Initiative,” President Rampahosa stated asserting that both Egypt and South Africa prioritize the preservation of global peace and security.

Introduced as a plan aiming to develop Africa, the road would be 10.300 km long, starting from Alexandria Port on the Mediterranean Sea then Cairo, Sudan, South Sudan, Ethiopia, Tanzania, Kenya, Zambia and South Africa. 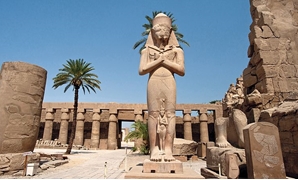