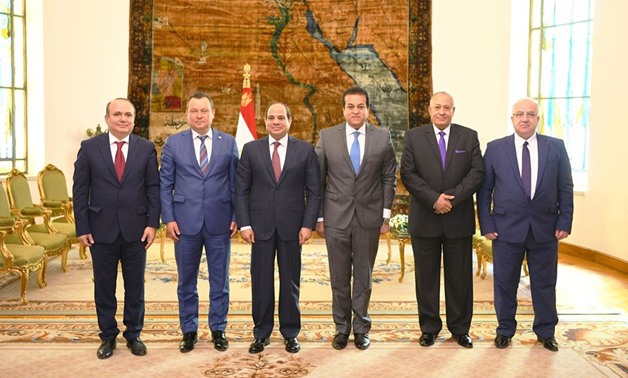 President Sisi met a delegation from the University of Bucharest on Saturday, one of Romania's most significant educational institutions - Press photo

By: Egypt Today staff
CAIRO – 17 November 2019: Romania's University of Bucharest of Economic Studies lauded President Abdel Fattah el-Sisi's leadership of Egypt during a hard period of turmoil, and his success in entering a stage of development and construction, the Presidency said in a statement.

This comes as President Sisi met a delegation from the university on Saturday, one of Romania's most significant educational institutions, presidential spokesman Bassam Radi said.

The Bucharest University in June conferred an honorary doctorate on Sisi, during his official visit to Romania as part of a European tour.

The president, on Saturday, welcomed the Romanian academic delegation in Cairo, headed by the university president, and asked to convey his greetings to President Klaus Iohannis.

Minister of Higher Education and Scientific Research Khaled Abdel Ghaffar was also present at the meeting.

Sisi praised the growing relations between the two countries over more than a century, including his last visit to Romania in June. Sisi also expressed thanks and gratitude to the university for granting him the honorary doctorate during that visit.

The delegation referred to the president's efforts in carrying out deep structural reforms at the national level in the economic and social fields. The delegation also hailed Sisi's launch of huge national projects in various sectors in the state, which contributed to improving the services provided to citizens.

The delegation members referred to the significant role of the president in enhancing bilateral relations between Egypt and Romania, especially at the academic and cultural levels.

They praised Sisi's keenness to carry out comprehensive development for the local education system and raise the efficiency of the higher education through a series of development projects, including the establishment of a number of technological and technical universities.

The meeting also discussed ways of enhancing cooperation in the field of education and culture between Egypt and Romania, especially through the exchange of scientific researches and scholarships, as well as reaching agreements to facilitate academic cooperation between the University of Bucharest and a number of Egyptian universities in similar sectors.

The university in June also valued the president's active contribution to the promotion of peace and cooperation at the international level and his pioneering efforts to formulate a comprehensive international framework to combat terrorism and extremist ideology, Radi said, as well as his leading efforts in Egypt to combat and contain terrorism.