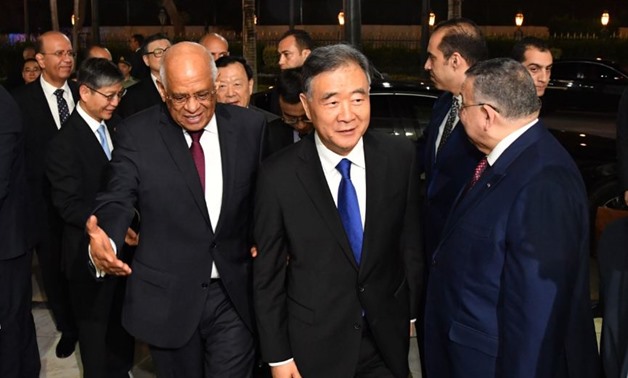 Abdel Aal considered the meeting as extension of the positive momentum witnessed in the relations between the two countries, and referred to the civilized history both countries share, according to Egyptian official statements.

The speaker said that Yang's visit comes within the framework of the keenness of Egypt and China to continue consultation on different regional and international issues of mutual concern, in light of the strategic and comprehensive relations between the two countries.

He also noted that the intense visits of high-level delegations from both countries are considered to be an important indication of the willingness of the political leadership of both countries to strengthen partnership and establish a humanitarian communication channel between their two states.

Concerning communication, Abdel Aal affirmed the importance Egypt attaches to the deepening of economic cooperation between Egypt and the Asian country. He referred to the Egyptian supportive stance toward China's "Belt and Road" initiative, as being in line with the African country's priorities and development strategy of the 2030 vision.

Abdel Aal considered such stance as a clear evidence of the similarity between the visions of the two countries concerning the importance of fostering global trade.

The Chinese initiative, “Belt and Road”, aims to boosting trade, investments, and infrastructure in over 150 countries in Asia, Europe, Middle East, Africa, and Latin America. The initiative is a revival to what was known as “The Silk Road.”

Abdel Aaal also affirmed Egypt's full support to the Chinese companies' work in Egypt, referring, in this regard, to the most significant legislations issued recently by the Egyptian Parliament to encourage foreign investment through providing appropriate investment climate.

Terrorism has been also part of the talks; Abdel Aal highlighted Egypt's leading role in combating terrorism, as well as establishing peace and security in the Middle East and Africa, especially in light of Egypt's chairmanship of the African Union for this year. He urged consolidating international efforts to counter such the terrorism phenomenon.

Yang, for his part, affirmed the mutual vision of China and Egypt toward the issues of the region and the world of mutual concern, since the political leaders of the two countries announced the comprehensive strategic partnership in 2014.

On terrorism, the Chinese official reviewed his country's efforts to fight this global phenomenon, and praised Egypt's comprehensive counterterrorism concept. He voiced support to Egypt in combating terrorist acts.

Yang called on Egypt to make use of its pivotal and leading role to enhance the relations between China and each of Africa and the Arab nations.

He affirmed that Egypt has been among the first countries to back its "Belt and Road" initiative, affirming that the Egyptian-Chinese economic relations share many factors that enable their steady growth.

The CPPCC leader also addressed terrorism, saying that his country is keen to increase the number of Chinese tourists to Egypt.

At the Parliamentary level, Yang called for enhancing the bilateral relations to cope with the relations of comprehensive strategic partnership between the two countries.