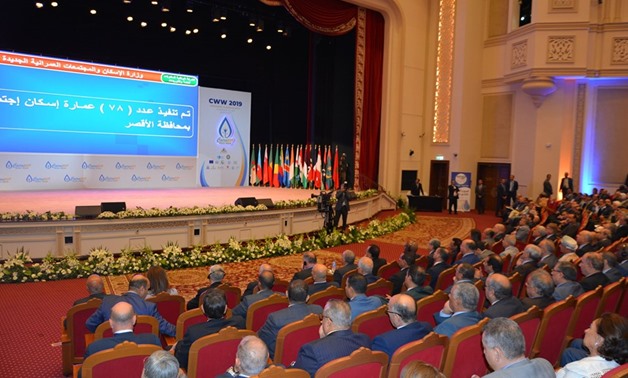 By: Samar Samir
CAIRO - 21 October 2019: The World Water Council (WWC) is ready to intervene and hold a dialogue with the Nile Basin countries to reach a fair share of the Nile water for states, said WWC Chairperson Loïc Fauchon.

This came in Fauchon's speech at the second edition of the Cairo Water Week Forum (CWW) 2019 on Monday.

Fauchon added that the World Water Council had intervened to resolve the water conflict between Syria, Turkey and Iraq with the aim of providing equitable shares of the Euphrates River water.

Egypt has diplomatically and politically entered into a battle with some Nile basin countries over its share of the Nile water. The disagreement started in 2010 when five Nile basin countries (Ethiopia, Kenya, Uganda, Tanzania, and Rwanda) signed the Entebbe Agreement, per which the two 1929 and 1959 deals conducted during the British colonization could be relinquished.

The two deals had allocated 80 billion cubic meters of Nile water to Egypt; they also granted Egypt the right to veto against projects that could be established in Uganda, Kenya, Tanzania and Sudan and may harm its share.

A series of tripartite talks between the two countries along with Sudan began in 2014. One year later, the three countries reached an agreement, per which the downstream countries [Egypt and Sudan] should not be negatively affected by the construction of the dam. However, Cairo and Addis Ababa have recently blamed each other for hindering a final agreement concerning a technical problem.

In a similar context, Fauchon stressed the importance of using alternative and renewable energy for sea water desalination in Arish plant and in the reuse of the wastewater in Al-Jabal Al-Asfar plant, expressing his will to cooperate with the Egyptian government to save every single drop of water.

The Egyptian government is set to depend on desalination water plants to feed the population of the coastal cities along the Mediterranean Sea and the Red Sea, targeting the production of 3 billion meters annually by 2030, said Minister of Water Resources and Irrigation Mohamed Abdel Atti in his speech at the opening session of the five-day forum.

The 2019 round of the CWW comes under the theme “Responding to Water Scarcity”. The forum’s sub-sessions tackle themes of Research and Innovation in facing water scarcity; non-conventional water resource use; Cooperation in Water Sector; and Climate Change Impacts, Mitigation, and Adaptation.

The first edition of the CWW convened in October 2018 under the auspices of President Abdel Fatah al-Sisi to increase public awareness of water rationalization for sustainable development amid a state of water shortage.