By: Aya Samir
CAIRO – 26 June 2019: During the Cold war, most of the powerful countries were interested to invest in Africa to increase their influence and enhance their authority in the region which was an indirect war area same as the whole world back then.

By the end of this war, most of these countries retreated in their support, and their interest started to fade away. Several social and economic challenges started to wage inside Africa until Japan decided in 1993 to establish Tokyo International Conference on African Development (TICAD).

TICAD was held for the first time in Tokyo on October 5 and 6, 1993, aiming to enhance dialogue between African- Japanese leaders, promote Africa’s development, peace and security, strengthen relations between the countries, and establish strong partnerships between Tokyo and Africa.

The international conference which has been held regularly since then is not just led by Japan, despite being a Japanese initiative.

Several international partners shared the organization of TICAD along with the Japanese government which is co-sponsored by the United Nations. The partners list include: the United Nations Development Programme (UNDP), the African Union Commission (AUC) and the World Bank.

TICAD 1 was just the beginning that opened the door for more Japanese investments and cooperation between the two sides. The first conference resulted in “Tokyo Declaration on African Development”, according to Japan’s Ministry of Foreign Affairs.

The 48 African nations participating in the conference agreed on the declaration that included goals on developing these countries, and supporting private sector, as well as international and regional cooperation.

Other TICADs followed and continued to be held inside Japan, until it was held for the first time in Africa in 2016.

In an interview for ticad7global-insight on December 11, Shigeru Ushio, secretary-general for the Seventh Tokyo International Conference on African Development (TICAD 7) expected to be held in Yokohama on August 28-30, explained that the declaration announced in Nairobi comprised approximately $30 billion for a period of three years beginning in 2016.

He added that Japan has contributed effectively in the African economic transformation and reform through a number of its initiatives that supported micro, small and medium enterprises and allowed more than 1200 African youth to study in Japan.

"I would like to point out that Japan has contributed to African economic transformation through its initiatives and projects, such as Kaizen, to improve productivity of the MSMEs in many countries in Africa and through the ABE Initiative which has invited more than 1200 African youth to study in Japan who later are given opportunities to work as interns in Japanese companies," Ushio explained.

What TICAD 7 expected to be about

Replying to a question on the main topics that will be discussed in TICAD 7, Ushio explained that the ministerial meeting that was held last October was not just to review the last summit’s declaration and recommendations, but also to set a clear agenda for TICAD7.

“In the meeting, the participants shared their views on the importance of ensuring the international standards, including debt sustainability when conducting international assistance. They also highly appreciated Japanese and African private sector’s wide participation in the TICAD process. They further discussed broad issues such as expanding support for MSMEs; improving productivity of agriculture; human resource development; promoting science, technology and innovation(STI); energy development; health issues including UHC; disaster risk management; empowerment of youth and women; peace and security; and enhancing connectivity within Africa and beyond,” Ushio said.

He expressed that Japan will continue to attach importance to human resource development and technology transfer through public and private partnerships.


Five main plenaries were discussed in the meeting, including: Trends and Challenges since TICAD VI; Economic Transformation for Inclusive Growth; Healthy, Sustainable and Stable Society for Human Security and Strengthening Connectivity within Africa and Beyond.

The Egyptian leading role in preparations

Africa is the world's second largest and second most-populous continent. It includes a huge amount of resources and its markets are among the most promising markets in the world for investment.

In a report published by Brookings in April, it was stated that “Africa’s emerging economies present exciting opportunities to global businesses for expansion in retail and distribution. Changing demographics and improving business environments across the continent will be just two of the factors contributing to rising household consumption, which is predicted to reach $2.5 trillion by 2030.”

In another article published on Forbes, July 2017, David McDonald, founder of The Global Millennial, said that a “drastic shift towards financial sustainability is currently happening right now in Africa, which is leading many financial analysts to call it the next emerging market.”

He added that Africa is becoming a viable place for investment when you take into account the production capabilities that come as a result of having the world’s fastest growing population.

With Egypt’s Presidency for the African Union (UN), several key challenges were announced to be addressed, including enhancing investments in various sectors in the continent, discussing the peace and security issue, which is one of the main challenges and working on developing the AU capabilities to meet the African people's demands.

Last February, President Abdel Fatah al-Sisi headed to Addis Ababa where he received the presidency of the UN from his Rwandan counterpart Paul Kagame at the inauguration of the 32nd summit of the AU.

The summit, inaugurated under the theme “The year of refugees, returnees, and international displaced persons - towards durable solutions to forced displacement in Africa”, witnessed discussions on the African Peace and Security Council and the implementation of the AU road map and its capability to end civil armed conflicts on the continent by the end of 2020.

“Despite our extensive efforts to control and contain the conflicts in the continent and our ambitious plan to silence guns across the continent by 2020, it is no secret that the way is still too long to end fighting in Africa. Together, we should seek an end to this painful page of disputes in Africa which negatively affected the hopes for development in the continent,” President Sisi said during his speech in Addis Ababa.

He specified three main axes to achieve socio-economic development, Including boosting the regional integration efforts, acceleration of the continental integration through the establishment of the Continental Free Trade Area (CFTA) and providing more job opportunities for the youths.

“The first axis is boosting the regional integration efforts, and the shortest way to this goal is through upgrading the African infrastructure through increasing the trans-border projects and encouraging investment in this field, especially in the AU’s top priority projects like connecting Cairo-Cape Town by land, North-South power linkage and linking the Mediterranean with Lake Victoria.

The second axis is acceleration of the continental integration through the establishment of the Continental Free Trade Area (CFTA), which is one of the most important priorities of the AU. This will contribute to reducing the prices of many goods and increasing the African competitiveness internationally…,

The third and last axis represents the culmination of the two previous ones, namely seeking to provide more job opportunities for the youths. This mainly requires mobilization of national and international investments, attracting capital and localization of technology,” Sisi stated.

As part of the preparations for TICAD7, Egypt’s Minister of Foreign Affairs Sameh Shoukry met his Japanese counterpart Tarō Kōno on the sidelines of the Munich Security Conference (MSC) held from February 15 to 17.

According to the ministry’s spokesperson Ahmed Hafez, the meeting tackled coordination for both of TICAD and G20 summits.

Shoukry began the meeting by stressing Egypt’s appreciation for the progress made in the Egyptian-Japanese relations over the past 5 years in a continuation of the historical relations tying the two countries. 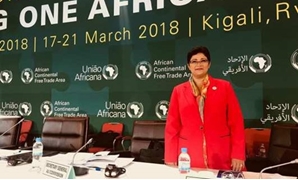