The report stressed the importance of strengthening the protection and the completion of the shelter to psychologically rehabilitate victims of trafficking. The report also highlighted the necessity to train a staff with a high level of competence to deal with victims of those crimes, she added.

Gaber's speech came on the sideline of a workshop on combating human trafficking that kicked off Sunday at the headquarters of the National Anti-Corruption Academy. The workshop was organized by the Cabinet's National Coordinating Committee for Preventing and Combating Illegal Migration (NCCPIM) in cooperation with the International Organization for Migration (IOM).

Gaber thanked the Administrative Control Authority for its continued support of the National Anti-Corruption Academy, and stressed that the authority wants the best interest of the Egyptian citizens and society.

For his part, Undersecretary of the Administrative Control Authority Hisham Zaalouk said that his body spares no effort to fight against corruption, wherever it exists, via its representatives.

Egypt witnessed a remarkable decline in the cases of human trafficking in 2017, compared to cases reported in 2014, according to a report released on Tuesday by the United Nations Office on Drugs and Crime (UNODC).

On November 21, AmrAbul-Atta, Egypt’s representative in the UN Security Council, said during the UN Security Council’s session on human trafficking that Egypt launched a national strategy regarding this issue in October 2016 and started its 5-year work plan (2016-2021) that includes various projects and media campaigns to raise awareness of the issue and build the capabilities of people working in that field in Egypt.

He clarified Egypt’s plan to combat this phenomenon, saying that the Egyptian law for combating human trafficking was issued in 2010, a national committee was formed and specialized courts were determined for judgment in these cases.

In the same context in late 2016, Cairo introduced a law stiffening penalties against human traffickers. The move came after a migrant boat capsized in September 2016 off the Mediterranean coast, killing hundreds. The law imposes prison terms and fines on those found guilty of smuggling potential migrants or acting as brokers or middlemen.

It also imposes prison sentences on those who provide shelter to trafficked migrants, and gather, transport or otherwise facilitate their journey.

President Sisi has spoken on multiple occasions about Egypt's ongoing efforts to curb irregular migration from its shores to Europe, a key concern for European countries facing a growing migrant crisis. 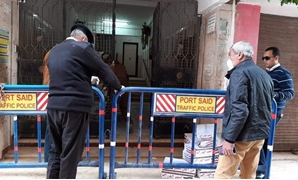