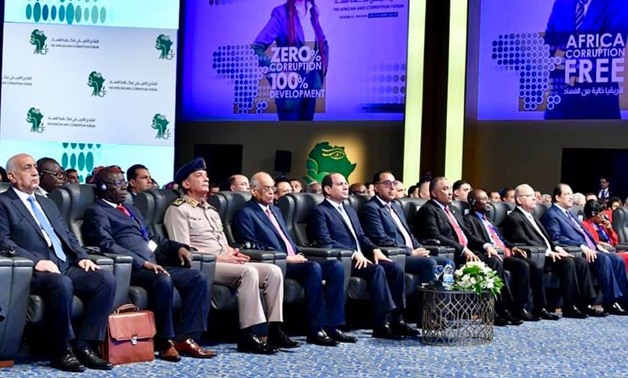 This comes on Wednesday during the inaugural session of the African Anti-Corruption Forum (AACF) held in the Red Sea resort city of Sharm El Sheikh, in the presence of Egyptian President Abdel Fatah al-Sisi and heads of regulatory bodies of the African states.

"The peoples of some African countries have suffered a lot from the loss of their resources and dreams for a better future," said Seif al-Din, affirming that corruption is "the biggest enemy," and that its losses is "estimated at billions of dollars a year."

Seif al-Din said that fighting corruption is one of the issues agreed upon by the African countries as "one of the most important priorities of the agenda adopted by the African Union as a plan of action for the continent until 2063."

Corruption in many African countries is an obstacle to the economic progress, and "can only be overcome with strong will and real reform efforts," he added.

Prime Minister Moustafa Madbouli, Speaker of the House of Representatives Ali Abdel Aal and Minister of Defense Mohamed Zaki along with Minister of Planning Hala El Saeed and other ministers and senior officials are attending the forum.

President Sisi, during the inaugural session, urged cooperation between African nations in the face of corruption, affirming the importance of concerted efforts, exchanging visions and enhancing coordination to curb corruption.

Sisi also affirmed that "Egypt will continue to support the joint efforts to combat corruption at the African level."