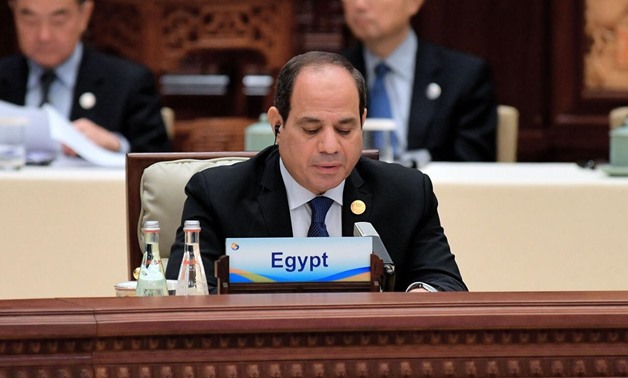 By: Noha El Tawil
CAIRO - 27 April 2019: President Abdel Fatah al-Sisi revealed on Saturday that Egypt is seeking to become a regional digital hub that transmits data between Asia, Africa, and Europe since Egypt is among the top countries through which submarine communications cables are run.

That was in his speech at the roundtable sessions held on the last day of the second Belt and Road Forum for International Cooperation (BRFIC).

President Sisi affirmed that Egypt has set an ambitious strategy to turn into a regional energy hub capitalizing on its unique geographical location as well as the consecutive oil and gas discoveries. That is in addition to the availability of the necessary infrastructure embodied in the gas transportation pipeline network, and gas liquidation plants.

The president added that the country is executing a number of projects in the sectors of renewable energy, electricity linkage, gas liquidation and transportation. President Sisi pointed out that the establishment of the East Mediterranean Gas Forum by Egypt is a proof of the promising opportunities in that sector vital for global economic growth.

The president described SCzone as a megaproject aimed at developing the Suez Canal axis to become a global economic and logistic center that effectively contributes to the development and improvement of international trade and marine navigation. President Sisi highlighted that the zone has been planned in accordance with a future vision that takes into consideration the anticipated evolution of marine navigation and the rates of international trade exchange.


The president asserted Africa’s need for funding for infrastructure through effective partnerships stating as examples Cairo-Cape Town project, Vic-Med project, and others.

The president stipulated the correlation between modernizing the infrastructure and achieving comprehensive development among BRI member states shedding light on national megaprojects accomplished in that sphere.