By: Egypt Today staff
CAIRO – 26 March 2019: Egypt's Foreign Minister Sameh Shoukri said that he discussed with his Swiss counterpart a number of regional issues and the issue of illegal immigration during the latter's visit to Cairo on Sunday.

Federal Councillor Ignazio Cassis, head of the Federal Department of Foreign Affairs, is visiting Cairo on March 24, 25, 2019 to meet with several representatives of the Egyptian Government.

During a joint press conference, Shoukri said that Switzerland is an important partner to Egypt, adding that Egypt looks forward to enhancing Egyptian-Swiss cooperation.

For his part, Cassis said that Switzerland holds a political dialogue with Egypt to promote bilateral relations, stressing that it is based on the main axes of economic growth, human rights, and cooperation to limit illegal immigration.

Cassis said that Switzerland is celebrating 110 years of joint relations with Egypt, pointing out that his country will support international cooperation with Egypt in the coming years. He asserted that he looks forward to finding the best way to cooperate with the Egyptian authorities.

Concerning the frozen funds of former Egyptian President Hosni Mubarak, in Switzerland,Cassis said that only the Swiss Judiciary will decide about these funds, explaining that other authorities cannot intervene in the issue.

The Mubaraks’ foreign assets were frozen in Swiss banks upon a request from the Egyptian government following his toppling in 2011.

Since then, the Swiss authorities conducted investigations with 14 suspects along with Mubarak and froze an estimated 650 million francs ($ 664 million) smuggled out of Egypt during Mubarak’s era to Switzerland.

However, in December 2016, Swiss Attorney General Michael Lauber announced in a press conference in Cairo that charges of money laundering and organized crime were dropped against a number of suspects, and a total of 180 million Swiss francs ($175.52 million) were unfrozen and returned to their owners.

The Swiss Attorney General Office (AGO) told Egypt Today in March that Mubarak is not one of the suspects that are being investigated over charges of money laundering or organized crime in Switzerland.

CAIRO - 6 September 2017: Swiss authorities have ceased legal mutual aid with Egypt over charges of money laundering or of organized crime in Switzerland …

Egypt is a key partner in the implementation of Switzerland's North Africa Strategy. Since 2011, Switzerland has supported political, economic and social developments in the region as part of its cooperation with Egypt, according to reports.

Furthermore, Swiss activities in the field of migration are also coordinated via the North Africa Strategy. 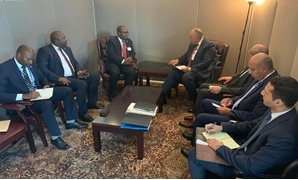