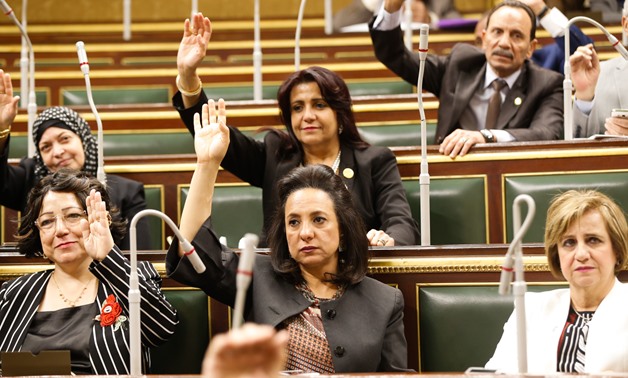 By: Nourhan Magdi
CAIRO – 19 February 2019: Egyptian women will be granted one fourth the number of Parliament seats according to the proposed constitutional amendments to increase women quota in the House.

The bill, upon which the public might be soon invited to vote, has collected different opinions on its proposed articles, with the women’s representation although considered the highest ever, some parliamentarians argued “less appropriate.”

The draft amendments of the Egyptian constitution have dominated public debate, and topped social media trends and discussions over the past weeks since the Parliament's announcement.

Last week, the majority of Parliament members voted in favor of the amendments, which consider several issues including: the presidency term’s length, women in politics, people with disabilities, Christians, blue-collar labor affairs, farmers and expatriates’ community.

Once passed in the Parliament, the amendments should be proposed in a public referendum, where Egyptians are required to head to polls to cast their vote whether with or against them.

According to the proposed amendments, Article 102 will assign a fixed quota for female parliamentarians. If passed, women will be holding 25 percent of the total House’s seats. The proposed bill stipulates that the number of total members of the Parliament must not be less than 450.

Since the establishment of the Egyptian House, the number of women parliamentarians has never reached such percentage. During the years of 1979, 1984 and 2010, when Egypt applied the quota, the Parliament witnessed high female representation as a result of the application of the quota, according to a report by The Egyptian Center for Women’s Rights (ECWR) in 2014, which called for at least 30 percent of the Parliament to be allocated for women.

In 2010, 64 seats were allocated for women at the Parliament, constituting 12 percent. But the figure declined to only 2 percent in 2011/2012 Parliament after the country allocated a quota for candidates without specifying women’s order in electoral list for political parties in elections, according to ECWR report.

Speaking to Parliamentarian Abla el-Hawary, she expressed agreeing to the amendments in principal; however, she said she is not pleased with the new assigned quote for women, as she believes it does not meet the “appropriate representation” stipulated in Article 11.

Parliamentarian Margret Azer praised the amendment of women representation as a move toward “the golden age of the Egyptian women”, saying in a Monday phone interview with Egypt Today that calls for women empowerment by previous governments were only “scenic,”.

Azer said, “this is affirmative; it is a good start for further empowering women in political life…this is clear in the current leadership’s realizing and highlighting of women's role in different events.”

She also noted that women representation could be higher than 25 percent in case the electoral process included lists of political parties, arguing that the figure might exceed 30-40 percent as women will be elected to lists in addition to individual seats.

During a session at the House, member of Parliament Ramadan Sarhan called for a societal dialogue regarding all the amendments because the people should have the final say on them. He also said that Article 11 of the constitution already achieves equality between women and men, and guarantees her rights in an appropriate representation.

Parliament Speaker Ali Abdel Aal responded to Sarhan that Article 11 has established the general idea, and that there is no conflict between this article and Article 102.

On his official account on Twitter, Parliamentarian Mostafa Bakry praised the amendments and wrote: “It is time now to have a vice president in Egypt, and for women’s suitable representation in Egypt after they proved that their contribution to the nation is no less than the men's, and it is time to have a media council and for the ongoing conflict between the three authorities to end.”

Egypt Today spoke with women randomly on the street, who welcomed the amendment with regard to female parliamentarians’ representation; they stressed that “women have proven their great participation and success in different fields over the past years,” and that women naturally “see problems from different angles than men, which could usefully contribute to solving them.”

CAIRO - 6 February 2019: The proposed amendments to the constitution have granted women a fixed quota. If the amendments are approved, women will hold 25 percent of the total parliamentary seats by the power of law. The proposed bill stipulates that the number of total members of the Parliament must not be less than 450.