By: Dania Akkawi
CAIRO – 18 August 2018: The Turkish police released Hisham Abdullah, Al-Sharq’s Egyptian TV host, after five days of arrest despite the memorandum submitted to the International Criminal Police Organization (INTERPOL) that places Abdullah on the list of terrorists.

However, after he moved to Turkey to work on Al-Sharq’s channel, launched in 2014, he often criticized the current Egyptian President Abdel Fatah al-Sisi’s leadership. Al-Sharq is one of the Turkish channels known for opposing the Egyptian government and presenting incidents in a way that can often distort the reality of the situation.

Both Egypt and Turkey are member states in Interpol and have, theoretically speaking, an obligation to combat terrorism and crime because it is the common goal of all Interpol member states.

Even though Interpol’s primary role is to “assist law enforcement agencies around the world in combating all forms of transnational crime and terrorism,” why Turkish national security would free Abdullah after arrest, before sending him back to Egypt, his home-country that placed him on the terror list, is a matter of debate that requires a detailed look into Interpol’s rules.

The way Interpol works is that, different types of alerts, known as notices, are sent out to all countries regarding an individual ‘wanted’ by the national authority. These notices come in different levels, some are sent to collect extra information on a suspect’s identity and some are just for warning.

If a Red Notice is sent on a certain individual, this means it is a request to locate, arrest and extradite the suspect back to the location of crime or incident, usually the home-country. However, Interpol does not actually have the authority to force member states to actually arrest the individual with the Red Notice because “each member country decides for itself what legal value to give a Red Notice within their borders,” as per what is written on Interpol’s official website.

Regardless of whether or not Turkey should have the right to decide what happens to Abdullah, sources revealed he was arrested by police on the account of overstaying his visa, alongside being placed on Interpol’s terror list. Interestingly, the owner of Al-Sharq channel did not offer Abdullah any actual support.

The sources also revealed that a number of Muslim Brotherhood supporters mediated and asked Turkish authorities to release Abdullah, according to media reports, amid expectations that Abdullah may face deportation.

However, it is likely that Abdullah will not be deported to Egypt, according to his wife, Ghada Naguib, who explained in a Facebook video that the she was promised by authorities in Turkey that her husband’s crisis would end soon on Friday. 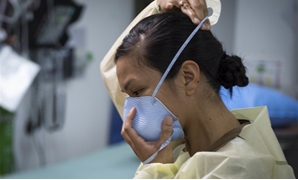