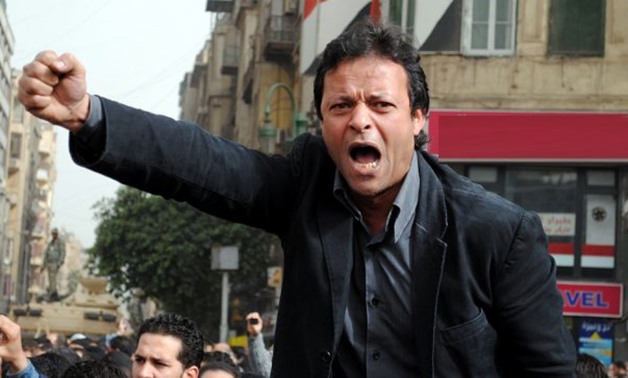 The sources revealed that police stopped Abdullah in the district where he lives, and that Ayman Nour, Al-Sharq channel owner, did not offer Abdullah any actual support.

The sources also revealed that a number of Muslim Brotherhood supporters mediated and asked the Turkish authorities to release Abdullah, according to media reports, amid expectations that Abdullah may face deportation.

Abdullah is an Egyptian actor who appeared in many films and drama series, including “Al-Tareeq ela Eilat” (Way to Eilat), and “Layaly Al-Helmiya” (Helmiya nights). He participated in the January 25 revolution in 2011 against ousted President Hosni Mubarak, and also in the June 30, 2013 revolution against the Muslim Brotherhood group.

Few days before the Egyptian presidential election in March, Egyptian opposition activist, Ramy Jan, returned from Turkey. He accused the Muslim Brotherhood of committing violations against him.

In an interview with Egypt Today, Mohamed Mohsen, an Egyptian citizen said: “I was interviewed by a correspondent for an anonymous channel in one of Giza’s streets in 2016. The correspondent did not reveal to me the channel’s identity which I think is very unethical.”

He added, “He asked me about the shortage in medicines at this time and how the government failed to carry out its duty. He influenced me to criticize the government. Few days later, a friend of mine told me that I appeared on Mekameleen channel.”

In a telephone interview in June with the Pro-Muslim Brotherhood “terrorist” organization's TV channel, George Ishak, member of the National Council for Human Rights (NCHR), said that the police forces killed a number of secretly abducted people in Arish city, without presenting any detailed evidence of the incident.

In July, Ishak justified his statements by saying that he did not know he was speaking to a channel hostile to Egypt. He also said that the channel twisted his statement, adding that the Arish case that he had described as enforced disappearance was later revealed to be of a terrorist who was eliminated by security forces.