By: Amr Mohamed Kandil
CAIRO – 18 June 2018: President Abdel Fatah al-Sisi, who has placed terrorism combat with ‘brutal’ force on top of his priorities, did not keep his merciful side concealed. Instead, some humanitarian situations for Sisi have left many of his regular critics speechless.

On Friday, A total of 2,110 prisoners were released per a presidential pardon, while 677 others were out on conditional release. The decision to release the prisoners on the occasion of Eid Al-Fitr was published in the Gazette last week.

Sisi attended on Friday celebrations of Eid Al-Fitr with the families of the nation's martyrs. The president welcomed the martyrs' children and families telling them he was waiting to meet them on this day.

After a photo of a working woman called Mona al-Sayed pulling a heavy cart in Alexandria circulated social media, President Sisi received the woman in late 2016 at Al-Ettihadeya Palace, and awarded her the Innovation Award for Youth.

Sayed is one of many Egyptian women who do rough jobs commonly carried out by strong men because they cannot find another source of income to provide for their families.

Later in April 2017, President Sisi offered the lady a Suzuki van to enable her to do her job easily.

President Sisi wipes tears of an Egyptian woman, March, 2017 – screenshot of the national TV channel
Stopping for a woman

During a youth conference held in Aswan in January 2017, President Sisi has reportedly stopped his presidential parade to listen to a woman complaining.

President Sisi appeared listening to the woman and ordering one of the men accompanying him to follow up her problems.

During his first term, Sisi met with Ahmed Yasser, a child who had suffered leukemia, upon the latter’s wish to meet the president. During their meeting in 2015, Yasser gave Sisi a copy of the Holy Quran as a symbol of love and gratitude.

In August 2015, President Sisi fulfilled the dream of a nine-year old cancer patient to meet him while dressed in the military uniform.

President Sisi accompanies Omar Salah, a cancer patient in the opening ceremony of the New Suez Canal, August, 2015.
In January 2017, Sisi inaugurated the main stage of the renovations of the Armed Forces Medical Complex in Maadi, south of Cairo, that is set to include a new cancer/oncology hospital, the largest of its kind in the Middle East, with a total capacity of 400 beds.

The complex is also set to include a laboratory with the latest technology to accurately examine tumors. 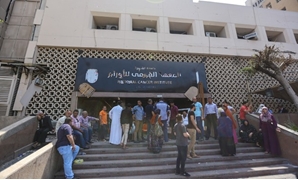