Legal instruments to be signed between Egypt, Ethiopia

By: Egypt Today staff
CAIRO – 18 January 2018: “I would like to express my satisfaction with what has been achieved during our meetings. We have agreed on several bilateral legal instruments that we shall sign tomorrow in the presence of the two states’ leaders,” said Minister of Foreign Affairs Sameh Shoukry on Wednesday.

During the closing session of the Ministerial Meeting of the First High Level Joint Commission between Egypt and Ethiopia held on Wednesday in Cairo, Shoukry said that other proposed draft legal instruments remain pending in the fields of telecommunications and exemption of diplomatic and service passports from the requirement of prior obtainment of visas.

“I am sure we will continue close coordination in order to conclude them soon. It is also equally important to maintain a close follow up of what has been agreed,” Shoukry explained.

Shoukry expressed his pleasure toward the outcomes of the ministerial meeting, as it will pave the way for steering joint successful cooperation in the fields of agriculture, trade, investment, mining, health, culture and education.

In this regard, he pointed out that the timing of holding the meeting is significant, as it proves the joint political will of the two states to overcome any obstacles in the way of their bilateral relations.

He stressed Egypt’s dedication to enhance cooperation with Ethiopia in all fields to increase the volume of trade and pave the way for more Egyptian investments in Ethiopia, particularly in the sectors of agriculture, industry and pharmaceuticals.

“It is Egypt's conviction that there is ample potential for economic integration between us that is not yet properly exploited,” Shoukry stated.

He confirmed that the two states should enhance security cooperation to face the imminent threats of terrorism.

Shoukry concluded that Egypt is fully committed to the implementation of the Agreement on Declaration of Principles signed between Egypt, Sudan and Ethiopia on the Grand Ethiopian Renaissance Dam, since if it is implemented, it will be a successful model of cooperation among Nile Basin countries.

Ethiopian Prime Minister Hailemariam Desalegn arrived in Cairo on Wednesday accompanied by a high-profile delegation to attend the sixth meeting of the joint Egyptian-Ethiopian Higher Committee. The last meeting was held three years ago and tackled several fields, including education, health, agriculture and fisheries.

The Ethiopian premier's three-day visit comes in the framework of the joint Egyptian-Ethiopian committee, which was postponed several times since last December. 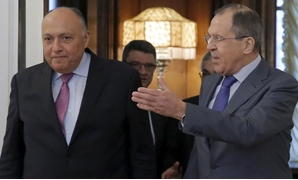