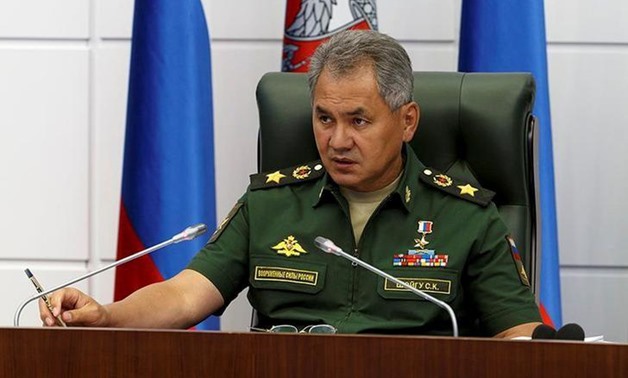 Russian Defence Minister Sergei Shoigu chairs a meeting on Syria at the Defence Ministry in Moscow, Russia, in this picture released on July 28, 2016. Vadim Savitsky/Ministry of Defence of the Russian Federation/Handout via REUTERS

By: Reuters
MOSCOW - 14 December 2017: From Damascus to Doha, Russian Defense Minister Sergei Shoigu has been showing up in unexpected places, a sign of the military's growing influence under Vladimir Putin.

In the past few months, at times wearing his desert military uniform, Shoigu has held talks with Syria's president in Damascus, met Israel's prime minister in Jerusalem and been received by the Emir of Qatar in Doha.

The defense ministry's forays into areas long regarded as the preserve of the foreign ministry are raising eyebrows in Russia, where strict protocol means ministers usually hold talks only with their direct foreign counterparts.

The military is reaping political dividends from what the Kremlin saw as its big successes in Crimea, annexed from Ukraine after Russian soldiers in unmarked uniforms seized control of the peninsula in 2014, and Syria, where Russian forces helped turn the tide of war in President Bashar al-Assad's favour.

"That has translated into more top-table influence," said a long-serving Russian official who interacts with the defense ministry but declined to be named because he is not authorised to speak to the media.

The Kremlin and the defense and foreign ministries did not respond to detailed requests for comment for this article, but three sources who know both ministries well confirmed the trend.

The growth of the military's influence has caused discontent among some Russian diplomats and unease among Western officials about the harder edge it is giving Russia's foreign policy.

"If you allow the defense ministry a bigger say in foreign policy it's going to be looking for trouble," said one, who declined to be named because of the subject's sensitivity.

Shoigu's high profile has also revived talk of the long-time Putin loyalist as a possible presidential stand-in if Putin, who is seeking a fourth term in an election in March, had to step down suddenly and was unable to serve out a full six-year term.

Shoigu, 62, is not involved in party politics but opinion polls often put him among the top five most popular presidential possibles. His trust rating is also often second only to Putin, with whom he was pictured on a fishing trip this summer.

The military's influence has ebbed and flowed in Russia and, before that, the Soviet Union.

It had huge clout at the end of World War Two and in the 1950s after the death of Soviet leader Josef Stalin when Georgy Zhukov, a commander credited with a crucial role in defeating Nazi Germany, was defense minister.

But the ignominious Soviet withdrawal from Afghanistan, completed in 1989, two wars Russia fought in Chechnya after the Soviet Union's collapse, and the sinking of the Kursk nuclear submarine with the loss of all 118 people on board in 2000 left the military's prestige in tatters.

Under Putin, a former KGB agent who as president is the armed forces' commander-in-chief, its stock has risen. Defense spending has soared, the military has been deployed in Georgia, Ukraine and Syria and its actions are used to foster patriotism.

The military's growing political and foreign policy muscle is most noticeable when it comes to Syria.

After going to Damascus twice earlier this year for talks with Assad, Shoigu was at Putin's side this week when the president flew in to meet the Syrian leader. Foreign Minister Sergei Lavrov has not visited Syria at all in 2017.

Unusually for a defense minister, Shoigu has been involved in diplomatic efforts to bring peace to Syria. In this role he has spoken about the importance of a new draft constitution for the country, met the U.N. special envoy on Syria and had talks with Israeli Prime Minister Benjamin Netanyahu and the Emir of Qatar, Sheikh Tamim bin Hamad al-Thani.

A Western official who has direct contact with the foreign and defense ministries said the Russian military had real heft in Damascus of a kind the foreign ministry did not.

There was "strong mutual trust" between the Russian military and senior people in Damascus, the official said, because "the Russians saved their asses and the Syrians respect that."

The foreign ministry retains strong Middle East experts and continues to play an important Syria role, helping run peace talks taking place in Kazakhstan. But Lavrov's own efforts to secure a U.S.-Russia deal on cooperating in Syria have shown how differently the foreign and defense ministries sometimes think.

Lavrov is still seen as a formidable diplomat whom Putin trusts and respects. But Western officials say he is not summoned to all important meetings and is not informed about major military operations in Syria.

The Kremlin denies the allegations.

Other policy interventions included a news briefing in December 2015 at which the defense ministry said it had proof that Turkish President Tayyip Erdogan and his family were benefiting from illegal smuggling of oil from Islamic State-held territory in Syria and Iraq.

Erdogan said the allegations, made at a briefing held a week after a Turkish air force jet shot down a Russian warplane near the Syrian-Turkish border, amounted to slander.

The defense ministry's response to the incident was much sharper than that of Russian diplomats, part of a wide-ranging communications policy that has included frequent criticism of the U.S. State Department and Washington's foreign policy.

Shoigu was involved in talks between Putin and Sudanese President Omar al-Bashir in Moscow last month and the ministry hosted Khalifa Haftar, Eastern Libya's dominant military figure, aboard its sole aircraft carrier in January. During the visit, Haftar spoke to Shoigu via video link about fighting terrorism in the Middle East.

One Western official told Reuters such incidents were fuelling fears that Russia plans to expand its footprint beyond Syria, where it has an air base and a naval facility, to centres such as Yemen, Sudan or Afghanistan.

The military's influence in domestic policy-making has expanded too, Russian analysts and Western officials say, with Putin seeking its views on everything from the digital economy to food security.

That is in part because Putin, since the annexation of Crimea from Ukraine, has altered the way he takes decisions and widened the scope of what the Security Council, which he chairs, discusses to include many domestic policy questions.

"At a time when there's a feeling that Russia is increasingly surrounded by enemies, Putin is consulting the intelligence services and the military more when he takes all decisions. He's meeting them all the time," said Tatyana Stanovaya, head of the analytical department at the Center for Political Technologies think tank.

Stanovaya said that did not mean the military was initiating ideas, but that its opinions were taken into account far more by Putin now than in the past and that it now had an important voice on domestic policy areas.