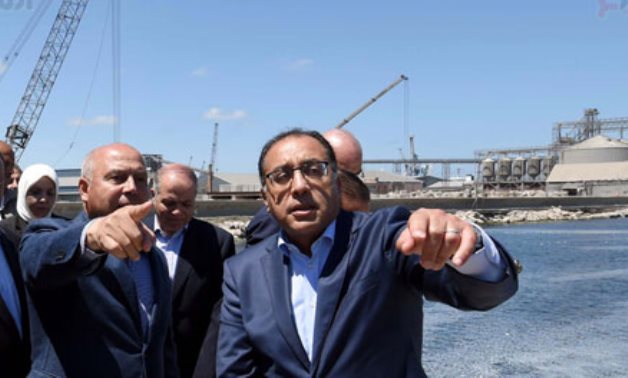 CAIRO - 17 August 2022: Prime Minister Mostafa Madbouli asserted on Wednesday the government’s keenness on continuing the implementation of the Decent Life project despite all challenges as it is considered as the 21st century project.

In a statement during his visit to Alexandria governorate to follow up on the projects underway at the port, the premier said he started the tour by visiting Abu Sir village of Borg el Arab district to inspect the Decent Life project. He also noted that President Abdel Fattah El Sisi is always directing the government to follow up the implementation of the presidential initiative.

The premier was accompanied by Minister of Finance Mohamed Maait, Minister of Transport Kamel El Wazir, Alexandria Governor Mohamed El Sherif as well as a galaxy of officials.

During his tour of the port, the premier visited the building of Misr Technology Services (MTS) company which is assigned with the implementation of Advance Cargo Information (ACI), which is a new customs system under which Egyptian importers are required to declare full information about goods to be shipped to Egypt before actual loading from the exporting country.

The premier asked some customers of MTS about the services offered to them through the logistics center as they praised the platform and its managerial system.

Maait briefed the premier on the practical benefits of implementing ACI, noting that Egypt is among top countries which introduced such system as it reduced the customs measures and the timing of releasing goods especially those pertaining to production requirements and strategic commodities.

The “Haya Karima” project seeks to unify the efforts of all the state’s institutions in cooperation with the civil society, the private sector companies and the development partners inside and outside Egypt in the sustainable development field.