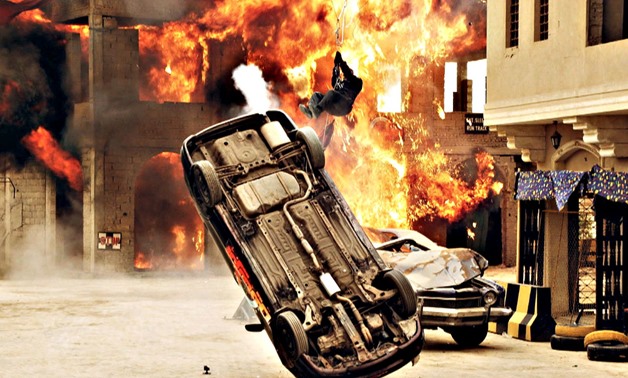 Egypt’s action movie industry has come a long way since the days of fake blood, awry fight scenes and cringe-worthy sound effects. A far cry from the limp car chases, cheap stunts and the most basic video editing effects, today’s meticulously executed action movies use cutting-edge technology and are wildly expensive to produce. One of those movies is Harb Karmous, written and produced by Mohamed El-Sobky, which hit cinemas during Eid days and is currently showing in most movie theaters.

“The movie will present a new action style that was never presented before in the history of Egyptian action movies,” director Peter Mimi promised, shortly before the movie was released. “I recalled in the movie 15 hours from various documentaries, in addition to 1,200 images of different forms of weapons, cars, tanks, armor and outfits to suit the film’s historical setting in order to reduce the percentage of errors. Making this film was not easy or simple,’’ Mimi said on his official Twitter account.

The film takes place in the era of King Farouk, the last king of Egypt, and revolves around a police officer, Youssef el-Masry (Amir Karara), who lives in the district of Karmouz in Alexandria. The film stars famed English actor Scott Adkins, known as “Boyka,” in his first appearance in Egyptian cinema, alongside Karara, Mostafa Khater, Ghada Abdel Razek, Bayoumi Fouad, Fathy Abdelwahab and Rogina, among others.

“Boyka is not the only international star in Harb Karmouz,” said Mimi, adding that stuntman Venko Mishev (of Acts of Vengeance, The Hitman’s Bodyguard and The Legend of Hercules fame) also stars in the epic movie.

In the Making
Mohamed Essam Abdelrazek is the only Egyptian drone pilot licensed in the UK, and the man behind the high-tech action scenes in several recent blockbuster films, including Harb Karmouz. “After I reached the top level in Egypt of filming acclaimed movies and projects, I wanted to go further, so I decided to work on getting the UK license for filming aboard a drone. It’s the same as a private pilot license; I studied for a week, and then took a theoretical test and passed it,’’ Abdelrazek explains. He then came back to Egypt and worked on a related 80-page Operations manual; once he got it approved, he went back to the UK to take his practical test flying heavy lift drones, the top license for drones. “I passed the test and became the first and only Egyptian or Arab registered as a drone pilot in the UK,’’ Abdelrazek says, speaking to Egypt Today shortly before the release of Harb Karmouz.

Abdelrazek is credited for action scenes in El Khaleya (The Cell), Horob Edtrary (Forced Escape), A’antar Ibn Shadaad and Yabany Asly (Original Japanese) in addition to Serry Lel Ghaaya (Extremely Confidential) which chronicles Egypt’s history from the beginning of the uprising against Hosni Mubarak on January 25, 2011 until the ousting of Mohamed Morsi on June 30, 2013. The film, whose budget (an estimated LE 200 million) is the highest of any Egyptian production to date, covers the terrorist attacks and disturbances that occurred during this time.

Abdelrazek explains that action scenes require the best cinema equipment and human resources possible to be carried out perfectly, all of which come at a price. “Experience and talent, in addition to the crew’s capabilities and qualifications, are key in executing the action scenes, but they also require the latest motion equipment and techniques to appear engaging and appealing to the viewer. From cable cams, techno-cranes, cranes, buggy cams, Russian arms, steady cams, camera gimbals . . . the list goes on for whatever makes any action scene look epic. Not only motion equipment, but also advanced cameras, post production graphics and editing. The differences between now and the past are technology, experience, and knowledge,’’ he maintains.

Drones, used specifically to shoot videos, have taken the making of action scenes to a new level, says Abdelrazek, who adds that all scenes involving drones “are dazzling, and there is no chance of any fault.” He also explains that, whether it’s for movies or TV, action scenes are much more difficult to make than any other genres because “the shots are quick, with fast-moving targets, a lot of action taking place, maybe several at the same time, and you get the order from the director to move along with them all in a sequence. Sometimes it’s an explosion that can’t be repeated again, a car that falls into a river and gets destroyed, a car flipping over, a hero jumping from a bridge into a river,” says Abdelrazek.

He recounts one scene in Horoob Edtrary with Amir Karara driving a car off Kasr El-Ainy Bridge. “For the actual jump, this car was stripped of all the electronics, engine, fuel, and transmission. There was no one in the car, which we attached to a steel rope hooked to a truck. There was ramp right on the edge of the bridge, and once the shot was about to get executed all the cameras were on and running, including the drone in the air, the truck moves on the word ‘Action!’ to pull the car flying off the bridge and into the water. This scene was very difficult and unrepeatable, because the car was totally destroyed. With the amount of funding we had, we couldn’t do it again. Luckily, we got it right,’’ says Abdelrazek, adding that Amr MacGyver and Andrew Mckenzie were responsible for the motion of the cars.

El-Khaleya also had car chases and cars jumping off bridges, as well as explosions and gun battles. ‘’There was that scene where a car is driven by Ahmed Ezz with Mohamed Mamdouh in the passenger seat and they jumped from the bridge, landing on a truck. In reality, the car moved and stopped at the edge of the bridge and the rest was graphics,” says Abdelrazek, explaining that the area was mapped before the scene using a drone so the graphics could be added in post-production.

Graphics are very important, but very often the scenes are completely real. In Serry Lel Ghaaya, for example, real weapons, tanks and war machines were used. “We went and shot scenes in real military bases and the scenes were designed by military generals. All this adds to the realism of any production, but requires lots of funding that you can’t find in many Egyptian movies,’’ Abdelrazek adds.

One feature that has helped bring down cost is the green screen or the “chroma key.” “In the past, you had to build a huge set just for the background scenery on an action scene or, like in the 1940s and 1950s, just head to a studio and get the background painted on a big chart. Now, you use a big green chroma and the graphics are added in post-production afterwards, and it ends up looking so real. It saves money and time,’’ Abdelrazek explains.

Big Budgets
Most action movies in Egypt lack sufficient funding required to execute realistic action scenes that can compete with global giants produced in countries like the US, according to Abdelrazek. “No doubt the Americans are number one; they have all the tools and qualifications, and their industry is big and always pushes them for the best,” he says, promising that Harb Karmouz and Serry Lel Ghaaya would make a major leap in the history of Egyptian action movies because of their high budget.

That leap will not just come from cutting-edge technology, but also from the experienced crew manning it. “[Low budgets] are why we have few qualified crew members around Egypt. If we get good funding, the industry demand will increase for top-level crew members, which will, in turn, raise the standard. Instead of a strong crew in a certain profession, you will have several more,’’ Abdelrazek says.

Fueling the growth of film production budgets are the viewers themselves, says Abdelrazek, highlighting that the Egyptian audience’s taste has shifted radically in the recent period, with cinemagoers preferring action movies more commonly. The numbers speak for themselves: Horob Edtrary, starring Ahmed El-Sakka, made some LE 43 million in box-office takings but was beaten by El-Khaleya which achieved the highest revenues in 2017 and became the highest-grossing movie in Egyptian cinema history, bringing in some LE 55 million.

El-Khaleya highlights the continuous efforts exerted by security forces to combat terrorism, as well as the obstacles and the suffering they face as a result. Egyptian megastar Ahmed Ezz plays the special operations officer who works to stop more than one terrorist operation and brings down various terrorist cells. Tragically, Amr Salah, the Special Operations officer who took part in El-Khaleya, training Ezz and fellow actors on police exercises shown in the movie, was killed on duty in October 2017 during confrontations between police forces and terrorists in an oasis in the Western Desert. Salah had also appeared in in the film; in one scene changing clothes in the locker room, another time appearing in a raid, as well as taking part in most of the scenes with Ezz in the camp.