The 1952 Revolution through Egyptian Cinema 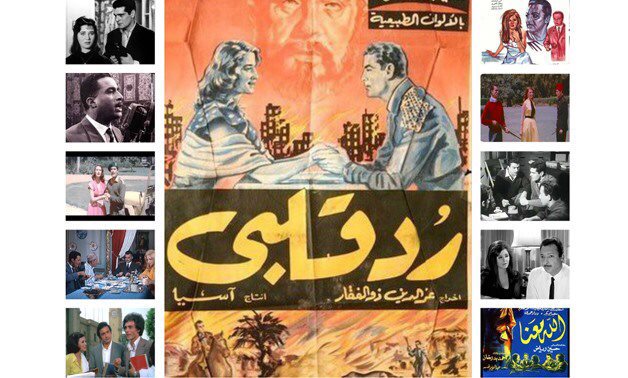 Cinema will always remain the truest and the most authentic archive of history.

As we commemorate the anniversary of the July 23 Revolution this issue, we cannot forget the works of Egyptian filmmakers chronicling the revolution that changed the course of both Egyptian and international history at that time.

Egyptian cinema has played a great role in advocating for the revolution, closely documenting it through a series of distinguished films. But even as it portrayed how the rvolution was planned and its positive results, it also presented the negative aspects as well. Some films focused on the revolution’s advantages, while others focused on its disadvantages. We take a look at the masterpieces that have kept the July 1952 evolution alive in the hearts of the nation.

Rudda Qalby (Give Me My Heart Back), which was produced in 1957, is one movie that reflected the revolution, its goals and positive results. The great late Egyptian director Ezzeldin Zulfikar succeeded in conveying to the audience the story of a poor peasant whose son (Ali), played by the veteran actor Shoukry Sarhan, managed despite his difficult circumstances to join the aristocrats-only military faculty.

Ali later rises to power after the revolution, against an unfolding immortal love story that takes place between arguably one of the most famous couples in Egyptian cinema: Princess Angy, performed by the late great actress Mariam Fakhereldin, and Aly. Together they overcome all social differences between them, to live happily ever after.

Port Said is another movie championing the revolution and its leader, then-President Gamal Abdel Nasser. The closing scene of the movie cuts to an Egyptian brigade chanting Nasser’s name. The movie incorporated true scenes of the destruction of the statue of Ferdinand de Lesseps, a symbol of European colonialism, in Port Fouad city.

Produced in 1964 and directed by Mahmoud Zulfikar, Al-Aydi Al-Naema (The Soft Hands) reflected how after the revolution Nasser managed to shore up the huge chasm between the upper class and the new emerging middle class. The film focused on the importance of work as the main criteria to judge people and not their social class. Starring Sabah, Salah Zulfikar, Ahmed Mazhar and Mariam Fakhr Eddine, the plot involves a formerly landed aristocrat who is forced to work for a living after being dispossessed by the revolution. He befriends an unemployed Arabic language professional who is unwilling to accept a job that does not befit his status. Both must adjust to the new social and political realities in an emerging socialist Egypt.

Post-revolution cinema producers made several movies that conveyed the corruption and harsh conditions that existed before the revolution like El Qahira 30 (Cairo 30) and Fi Baytona Ragol (A Man in Our Home), where they criticized the past and provided context for the revolution.

The movie Allah Maena (God Be With Us) dealt with the officers’ participation in the war in Palestine and the tragic loss of life and serious injuries, which led to anger among the military. As a result of this outrage, the Free Officers Movement headed by Nasser was formed by army officers to save Egypt from King Farouk and his corrupt entourage. The movie ends with the ousting of the king and the rise of the revolution.

Other iconic classics such as Al-Karnak (1975), the 1978 Wara Al-Shams (Beyond the Sun), and the 1979 Ihna Bitua’ Al-Autobis (We Were Just Riding a Bus) all revolve around the same theme condemning the practices of both Nasser and the Egyptian intelligence against citizens. They focused on citizens’ unfair arrests and torture in prisons. In addition, they showed the oppression and injustice citizens were subjected to by the Nasser regime.