Palestinian factions wrap up 2nd round of National dialogue, thanks Egypt’s Sisi for support, sponsorship 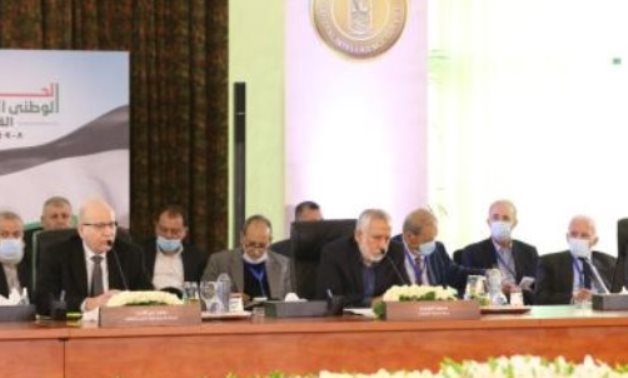 CAIRO – 17 March 2021: Palestinian factions warped up their second round of the National Dialogue meetings in Cairo, Wednesday as they thanked president Abdel Fattah al Sisi for his support along with hosting and sponsoring the Palestinian national dialogue that aims at ending the long-lasted political division.

Participants also reviewed the Central Elections Commission report on the preparations of the election to ensure the highest level of integrity and transparency during the upcoming elections.

The meeting factions also signed a pact of honor that affirms their keenness on pursuing the electoral process in all its phases while exercising transparency and integrity in a way that fulfills national unity and public interest.

During their talks, the 15-faction’s representatives also emphasized the unity of all Palestinian territories both at the legal and political levels, asserting that the elections must include East Jerusalem, West Bank and the Gaza Strip.

Egypt asserted keenness on helping Palestinians to overcome obstacles that could affect conducting the elections.

The first round of the National Dialogue held in Cairo last February and lasted for two days.

They set another date for a second round of meetings in March to agree on bases and mechanisms needed to complete forming the new National Council with the aim of developing the Palestine Liberation Organization (PLO).

The factions affirmed in their statement that they would adhere to the timetable set by January 2012 decree, emphasizing that the elections will be held in Jerusalem, the West Bank and the Gaza Strip without exception. All factions will be committed to respect the elections final results.

The final statement also affirmed supporting the central elections and working to overcome any potential obstacles.