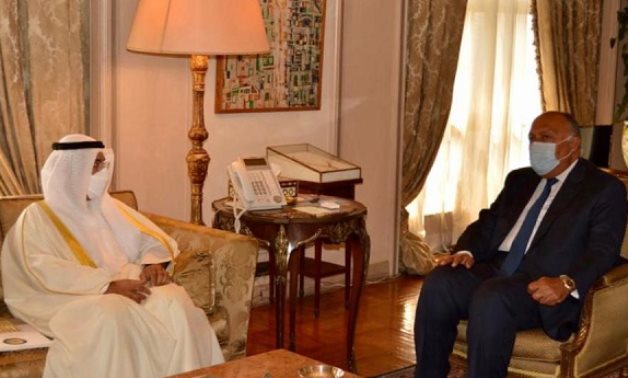 CAIRO – 7 February 2021: Egyptian Foreign Minister Sameh Shoukry and Secretary General, Cooperation Council for the Arab States of the Gulf (GCC). Dr Nayef Falah Mubarak Al-Hajraf met on Sunday, when they discussed several regional issues including Libyan crisis, and Gulf States’ security, according to a statement from the GCC.
Both officials discussed ways of enhancing cooperation between Egypt and the GCC within the framework of the strategic partnership in light of the outcomes of the Al-Ula summit that was held during the 41st Summit of the Gulf Cooperation Council (GCC) on January 5, 2021 in Riyadh, the statement said. Al-Ula summit has resulted in ending Gulf crisis between Qatar and Arab countries (Egypt, Saudi Arabia, the UAE, and Bahrain).
The talks also tackled the most prominent developments and challenges in the region, especially the situation in Libya, as the two officials welcomed the election of the new executive authority represented by the Presidential Council and the Prime Minister of Libyan in the UN-led forum in Geneva.

The Secretary-General praised the efforts of the United Nations Mission to Libya with this agreement, and wished that security and peace would prevail throughout Libya and strengthen its national unity, the statement added.
Foreign Minister Sameh Shoukry reaffirmed Egypt's support for the Arab Gulf States against challenges that threaten their security and stability, stressing that the security of the Arabian Gulf is an integral part of Egypt’s national security.
The Secretary-General will meet with President Abdel Fattah El Sisi on Sunday, according to a statement from the GCC.