Sisi didn’t disappoint Egyptians insulted by French cartoons, but to them it is more than condemnation 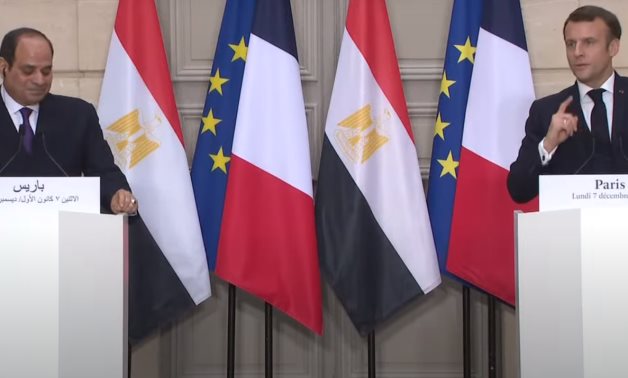 CAIRO – 8 December 2020: President Abdel Fattah el-Sisi did not disappoint Egyptians insulted by the latest French cartoons when he held a joint Monday press conference with his counterpart. But a presser can only last for so long.

Sisi made sure it is clear that Egypt rejects any form of violence in response to such cartoons, reiterating Al-Azhar’s similar stance that such acts are unjustifiable. It is what many Muslims feel obliged to say even when an act of terror is as abhorrent an alien to them as to anyone else.

“If expressing your opinion hurts the feelings of hundreds of millions and you still believe this expression cannot be rationalized or reviewed… We don’t mean all freedoms or all forms of expression, but only this point,” Sisi said.

“I believe that with the elevated values in France and the developed world that reject jeopardizing the rights and feelings of others… to hurt the feelings of hundreds of millions to the core of their religion and beliefs, I think this can calmly be reckoned with,” he added.

The president also said human values cannot be equal to values established by the divine, because human values are, obviously, human-made and are thus open for evolution and guidance. Macron’s response was that, basically, human values are above any other, referring, with a wagging index finger, to philosophy of the “Lumières,” or the age of enlightenment, the French revolution, and the United Nations resolutions on human rights.

That was the end of the press conference. To Egyptians, though, the debate is not mainly about the limits of freedom of expression, or whether secularism should still respect religions. They are skeptical that an innocent practice of free press is why these cartoons emerge every once in a while.

In the social media world, condemning violence, once again, was a given; Egyptians condemned the beheading of a French teacher who had shown cartoons that do not favor Prophet Mohamed at a history class. So did Al-Azhar, Egypt's most prestigious Islamic institution. Like a repeated flashback, or in this case a “déjà vu,” many people and entities said that freedom of expression has limits and that a human right should not undermine another human right.

The call for boycotting French products spread on social media, a usual reaction after a cartoon deemed derogatory to the prophet is publicly displayed in France. An Arabic statement by the French Foreign Ministry "demanded" the peaceful calls for boycott stop. The statement did more harm than good on social media, as Muslims found the tone supremacist and non-apologetic, not for the teacher's action, but for the "state-sanctioned" display of the cartoons on governmental buildings.

Granted, more Egyptians than every time were against the boycott, but not for one reason. Some say if the brand is French but the product is made in Egypt, then the boycott will harm Egyptian producers. Others say the cartoons and the reactions should be ignored like nothing happened because such reactions would give fame to the cartoons. And others say France is entitled to its form of freedom of expression and no reactions are required from the Muslim world.

Ghada Abdel Aal, an award-winning Egyptian author who had two of her books adapted into T.V. series, says below she regrets that people she thought were “rational adults” would call for a boycott without reading about the context first. She later says in the comments that in this particular incident, nothing deserves boycott.

“At the funeral of the man, of course Macron had to say he was with freedom of expression and against the terror displayed by the Muslims (who considered the Chechnyan boy a hero)... What was he supposed to say? ‘I am sure the boy and all those commenting as if he were a freedom fighter are righteous’! Or say the word we love to hear: ‘they do not represent Islam’”!

“There are contexts to what is happening that have nothing with France’s or Macron’s enmity against Muslims. We’re supposed to apologize for this incident in particular, not ask for apologies,” she adds.

She goes on to say “it is customary in France to mock all religions.”

But the reason why the Egyptian debate on social media has been particularly fierce is because it was not simply divided between conservatives and secular people. Rather, they were discussing whether the cartoons and the official condoning of them reflect racism, Islamophobia and double standards.

Conservatives' opinions have not changed much, but it is their respect for some liberals' opinions that exposed the "hypocrisy" of France that was uncommon, because otherwise the two camps disagree on almost everything.

Human rights activist Hossam Bahgat wrote a Facebook post about laws and amendments drafted just to protect the French flag from insult. He says in the end “fight all you want but let’s be clear on that the fight here is not about absolute freedom of expression and the right to insult all figures and hurt all feelings. This is a fight about the freedom to insult beliefs and religious figures in particular and especially insulting religious feeling. Let’s fight, but let’s focus.” Shady Lewis Botros, an Egyptian Coptic author who lives in the U.K., mentions the remarks of Canadian Prime Minister Justin Trudeau on that freedom of expression “is not without limits,” after strongly slamming the murder of the French teacher. Botros says here it would be difficult to accuse Canada of lacking freedom of expression and would also be “funny” to compare coexistence there to that in France, claiming that the French felt “betrayed” by the Anglo-Saxon media for not fully adopting the French view of the issue. In other posts, he even suggests that Anglo-Saxon media started treating France as an authoritarian state.

He concludes in this post that “freedom is one of the most exalted values produced by humanity if not the most exalted. It is a basic human duty to defend it. Part of this duty is not to succumb to any interpretation of freedom as a dogma, and to accept to discuss it all the time and at any time. Most importantly, freedom comes with a very heavy responsibility, a responsibility that is not imposed from the outside or by the force of law. It is a voluntary, ethical, and artluistic responsibility, that is, directed at the others and the entire world.”