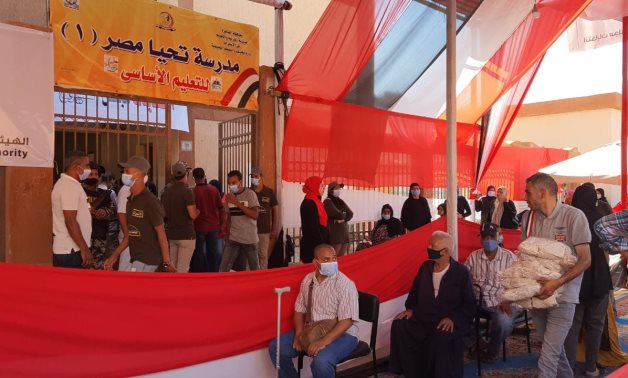 CAIRO – 12 August 2020: The second day of Senate Elections kicked off at home on Wednesday.

Queues of voters outside polling stations were seen as precautionary measures like sterilization gates were installed, disinfectants and masks were distributed among participants.

Egyptians at home started voting process Tuesday in the Senate Elections Tuesday at home, after it concluded expats vote on Monday.

The Senate is the upper chamber of the Parliament, which was reinstated as part of constitutional amendments that passed in a referendum in 2019, in replacement of Shura Council, which was dissolved in 2014.

The voting process kicked off at 9 a.m. as scheduled by the Supreme Elections Committee. Queues of voters wearing medical masks and holding disinfectants were seen outside polling stations in different governorates; floor marks keeping social distance for voters were seen at some polling stations.

Noticeable turnout by elderly voters was seen during the early hours of the day.

A total of 63 million Egyptians are registered voters, and entitled to vote in the 2020 Senate elections, where they will cast their votes at 14,092 sub-polling stations. The judicial supervision of the voting process is assigned to 18,000 judges and 120,000 employees.

On Monday, Egyptian expats concluded 2-day voting process in 124 countries via mail. The final results of the Senate elections will be announced on August 16.

The General Command of the Armed Forces had taken all measures to secure the 2020 Senate elections nationwide, and provide a safe environment for citizens to cast their votes, in coordination with the Interior Ministry.