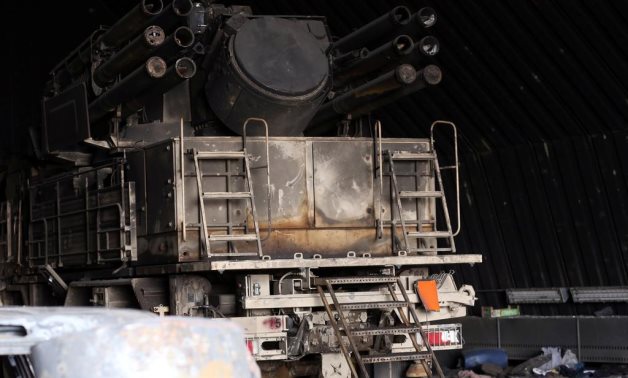 A rocket launcher vehicle is seen after fighters loyal to Libya's Government of National Accord (GNA) took control of Watiya airbase, southwest of Tripoli, Libya May 18, 2020. REUTERS/Hazem Ahmed

Mahgoub added that Turkey has begun to lower its hostile tone in statements on Libya after its Defense Minister Hulusi Akar had said one day before the hit that Turkish presence would continue forever in Libya. The commander attributes such behavior to the "firm stances Egypt has recently taken."

"The security of Libya and Egypt is intertwined. The Libyan army is being revived, and does not possess capabilities similar to those of Turkey. Hence, it definitely needs Egypt's support on the air, naval, and land levels," Mahgoub showcased.

The commander said that the Libyan people was positive the Egyptian House of Representatives would approve military intervention in Libya.

As stated by LNA Spokesperson Ahmed al-Mesmary, Turkey has transported into Libya 25,000 mercenaries. Those include 17,000 Syrian militants, 2,500 Tunisians who fought in the ranks of the Islamic State (IS) in Idlib and Aleppo, and other nationalities including the Sudanese.

Turkey has also sent 1,500 officers and experts to co-command the operations rooms of the GNA militias and to pilot drones from mainly Tripoli's Mitiga Airbase. The LNA downed around 70 Turkish drones as they were targeting its concentrations.

On the same day, Turkish Defense Minister Hulusi Akar visited his forces in Tripoli and Misrata. While checking on a warship anchored near the coasts of Tripoli and Mitiga Military Hospital, he asserted that his country's forces "will remain forever in Libya, althoughtheir ancestors left in the past," as reported by Sky News Arabia.

Akar referred to the Ottoman colonization of the Arab world saying that Turkey "has had a joint history with the region for 500 years," adding that his country aims at the protection of the non-recognized state, dubbed the Turkish Republic of Northern Cyprus.

On July 6, the communication office of the Turkish presidency declared Al Jufrah Airbase a military target of the country's forces stationed in Libya pointing out that Sirte is a key city given it is the portal to Libyan oil resources.

On July 7, Libyan military sources told Youm7 that the LNA is reinforcing its defenses in Sirte and Al Jufrah to repel any attempts by the GNA or "mercenaries" to advance. The LNA installed advanced air defense systems in both towns as military reinforcements have reached militias eastern Misrata within a plan to move towards Sirte.

The Syrian Observatory for Human Resources (SOHR) reported that Turkey is still training Syrian militants on its lands and transferring them to Libya, despite the return of 3,200 to Syria.


The observatory revealed that around 300 Syrian mercenaries are aged between 14 and 18 in Libya, and that around 432 Syrian militants were killed in confrontations with the LNA, including 30 minors and leaders.