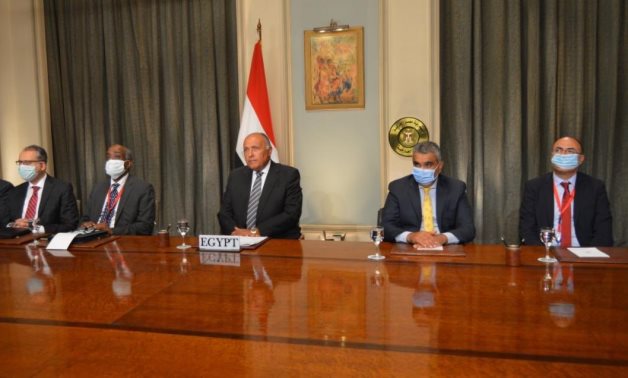 In a video conference for the United Nations Security Council on Libya, Shoukry said Egypt supports the political dialogue to resolve the Libyan crisis

In a video conference for the United Nations Security Council on Libya, Shoukry affirmed that the Cairo Declaration is completely consistent with relevant Security Council’s resolutions and the Berlin Conference’s outcomes.

He affirmed that stability in Libya can be achieved by forming a government and a parliament that all Libyans agree on, ending the presence of militias, countering terrorism, unifying army and the distribution of the country’s wealth. Earlier, Sisi announced Cairo's plan for a ceasefire in Libya, beginning June 8, after a tripartite meeting with the commander of the Libyan National Army (LNA) Khalifa Haftar and Speaker of Libyan Parliament Aqela Saleh on Saturday.

Sisi said that the political initiative, which he called the “Cairo Initiative” would pave the way for a return to normal life in Libya. President Sisi warned against using military tactics to resolve the crisis.

All Libyan parties have been asked to partake in the ceasefire, Sisi said, adding that LNA Chief Haftar and the eastern parliament head Aguila Saleh are committed to protecting the Libyan people’s best interests.