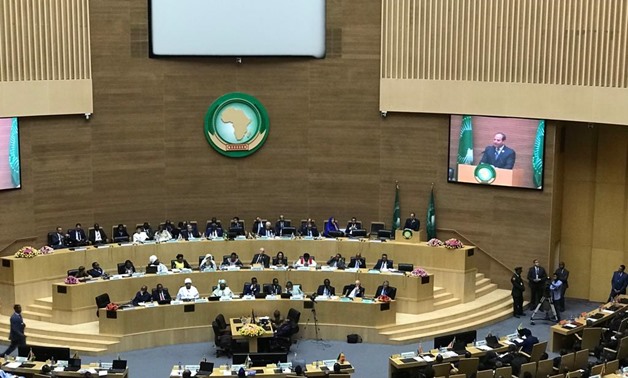 CAIRO - 26 June 2020: The African Union will hold an urgent virtual meeting on Friday in Addis Ababa, to discuss the developments in the stalled negotiations of the Grand Ethiopian Renaissance Dam (GERD), the Sudanese News Agency (SUNA).

The meeting will be chaired by South African President Cyril Ramaphosa, the head of the African Union in 2020.

The urgent meeting was announced few hours after a phone call conducted between President Abdel Fattah El-Sisi and his South African counterpart, as both leaders tackled Egypt's request to the UN Security Council to intervene in the issue of the dam to reach a fair and balanced agreement that takes into account the interests of all parties, according to Egyptian Presidential Spokesperson Bassam Radi in a statement.

I commend PM @SudanPMHamdok and the co-conveners of the Sudan Partnership Conference for hosting an important virtual gathering to mobilize political and financial support for Sudan. Ethiopia stands in solidarity with the Sudan. 1/2 pic.twitter.com/ilHHwmgGPw

Two days ago, Hamdouk and Ramaphosa discussed the ways of resumption of the tripartite negotiations between Egypt, Sudan and Ethiopia over the dam. They agreed on urging Egypt and Ethiopia to return to the negotiating table as soon as possible, the statement added.

Other African countries are pushing forward resuming the negotiations; Cabinet Secretary and Ministry of Water, Sanitation and Irrigation of Kenya Sicily Kariuki called upon the governments of the three countries to “solve outstanding issues over the GERD through dialogue,” stated the Ethiopian Ministry of Foreign Affairs in a statement on Twitter account.

Sicily Kariuki, Cabinet Secretary, Ministry of Water, Sanitation & Irrigation of #Kenya said #Ethiopia #Egypt, & #Sudan should solve outstanding issues over the #GERD through dialogue. She said this during a discussion she has had with Ethiopia’s ambassador to Kenya, Meles Alem. pic.twitter.com/GI3NcMywU0

Since 2014, Egypt, Ethiopia, and Sudan have entered into negotiations of the building of the dam to avoid any possible threats on the Nile downstream countries [Egypt and Sudan]. The latest round of the talks which convened early June reached a stalemate, ahead of the Ethiopian unilateral act of filling the dam’s reservoir mid-July without reaching a final agreement among the three countries.

Egypt last week decided to request the United Nations Security Council’s intervention in the dispute on Ethiopia’s massive dam after Egypt said several times that the two countries have been deadlocked over the dam.

Egyptian Ministry of Water Resources and Irrigation Mohamed Abdel-Atti said in a statement that Ethiopia also sought to obtain an absolute right to establish projects on the upper reaches of the Blue Nile River. It also refrained from agreeing on including a binding legal mechanism to settle disputes and effective procedures to face drought in the GERD agreement, he added.

The difference between Egypt, Sudan, and Ethiopia dates back to May 2011 when Ethiopia started building the dam; Egypt voiced concern over its water share [55.5 billion cubic meters]. Three years later, a series of tripartite talks between the two countries along with Sudan began to reach an agreement while Ethiopia continued the dam construction.

In 2015, the three countries signed the Declaration of Principles, per which the downstream countries should not be negatively affected by the construction of the dam. Since then, the talks have been resumed, but In October 2019 blamed Addis Ababa for hindering a final agreement concerning a technical problem, calling for activating the Article No. 10 of the Declaration of Principles, which stipulates that if the three countries could not find a solution to these differences, they have to ask for mediation.