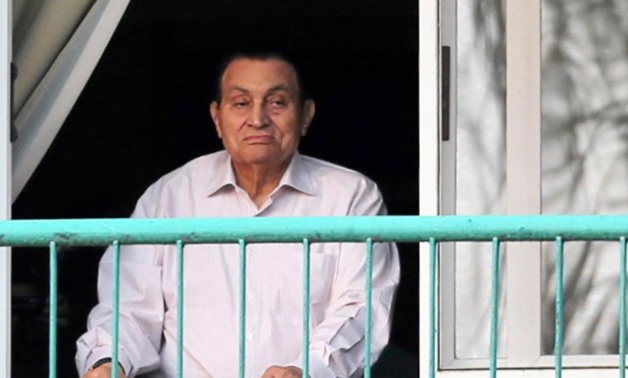 FILE- Ousted Egyptian president Hosni Mubarak looks towards his supporters during celebrations of the 43rd anniversary of the 1973 Arab-Israeli war, at Maadi military hospital on the outskirts of Cairo, October 2016 - REUTERS/Mohamed Abd El Ghany

On January 24, 2020, Alaa Mubarak announced that his father underwent a surgery and that his condition was stable, without going into further details.

Hosni Mubarak ruled Egypt for a period of 30 years before he was forced to step down on February 11, 2011 as a result of the January 25 Revolution. On May 24, 2011 Mubarak and his sons, Alaa and Gamal, were called to trial over charges of killing protestors and corruption. On August 19, 2013 Mubarak was acquitted of one of his corruption charges and two days later the court ordered his release from prison.

Before becoming president, Mubarak was a commander in the Egyptian Air Force from 1972-1975. Mubarak assumed presidency following the assassination of former President Anwar Sadat, with whom he served as vice-president.

Mubarak was regarded as a war hero by many Egyptians, because he served as commander of the Egyptian Air Force during the October 6 War in 1973. In a recent statement, Mubarak even claimed that he was the first to fire shots at an Israeli communication base from a fighter jet that he personally piloted six minutes before the surprise attack even began.

Mubarak’s reign was marked with an emergency law that gave authorities the power to conduct random arrests and heavily impeded human rights. He also expanded Egypt’s Central Security Forces and State Security Investigation Service. These tools were used to oppress the political opposition.

Mubarak was subject to several assassination attempts, including an attempt in 1995 when he was attending the African Union summit in Addis Ababa, Ethiopia.

In 2005, Mubarak was under pressure from the United States to encourage democracy, so he allowed other presidential candidates to run for the post. He won by a landslide, and the runner-up, Ayman Nour, was soon imprisoned on forgery charges widely believed to have been trumped up.

During his 30 years as president, he did not appoint a vice president until January 29, 2011 when he appointed former Chief of Intelligence Omar Suleiman as vice president in an attempt to appease protestors. It was Suleiman who announced Mubarak’s resignation in February 2011.

On Nov. 29, 2014, Mubarak was acquitted of graft, as well as illegally selling gas to Israel. The charges of killing protesters were dropped by the presiding judge, who said in his explanation of the verdict that there were no sufficient legal grounds to charge the former president. Protests in Tahrir Square followed the night of the verdict, with at least two protesters killed, including a 14-year old, and the attorney general has announced that he would appeal the acquittals.

On March 2, 2017, Egypt’s top appeals court issued a final verdict acquitting Mubarak of charges of collusion to kill protesters. Also, On December 20, 2017, the Federal Council in Switzerland issued a statement announcing it would lift the assets-freeze on Mubarak and the remaining affiliated figures involved with charges during his era.