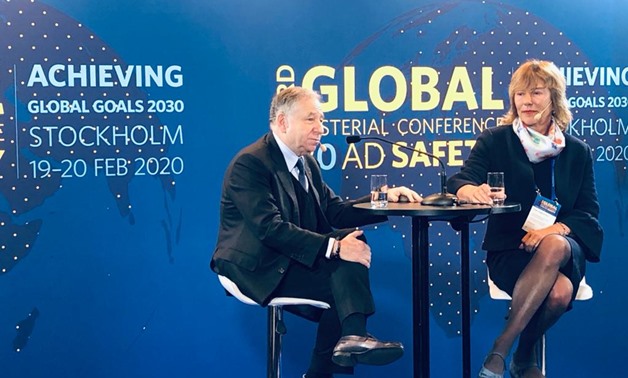 STOCKHOLM – 20 February 2020: UN's Special Envoy of Road Safety Jean Todt praised road safety work done in Egypt amid the major challenge of the country’s growing population, during a Wednesday press conference on the sidelines of the 3rd Global Ministerial Conference on Road Safety that kicked off in Stockholm.

“I finished a meeting with the Transport Minister Kamel el-Wazir, and I was impressed because for a 100 million population country it is really strong effort and input to make things changing,” Todt answered a question by Egypt Today. He explained that Egypt know that there is still have a lot of things to do among them is to apply to the road safety conventions, and sign protocols, they need to fulfill.

“They [Egypt] have the motivation and understanding of it, and of course what we will be able to give, we will give them,” he added.

Asking him about the problem of the lack of standardized data collection, or unified sources of information about road injuries or fatalities, Todt said that the UN along with the World Bank, and the Federation Internationale de l’Automobile (FIA) are working to install regional observatories and participate in data basis collection to better evaluate road safety worldwide.

He also talked about how his life path changed from being a rally driver and then the CEO of Ferrari’s Formula 1 team to a road safety advocate. According to a book he wrote about road fatalities, Todt said he have a passion for motorsport, and did not worry much about the risks when was a young man competing at the highest level in rally driving.

“I reached a stage in life where I realized that I wanted to pay more attention to what I could put back into a world that had given me so much,” his book reads.

Todt said during the press conference that he incidentally confronted serious injuries situations, where he was surrounded by the best doctors, and then he felt that [the doctors] were giving so much of themselves, and that he wanted to give something back.

Todt was elected as the head of Ferrari’s Formula 1, which won 14 world titles, and now he is the President of the FIA, the Federation Internationale de l’Automobile (FIA), where he set a priority of addressing road safety as part of its agenda once he assumed the position.