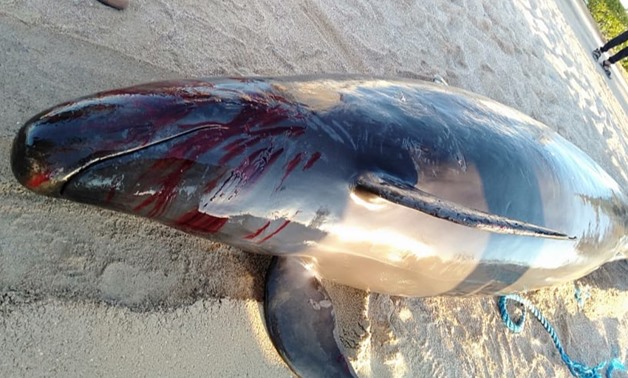 A large false killer whale, a large member of the dolphin family, was found dead on Wednesday on a beach in southern Red Sea city of Hurghada in southeastern Egypt – Press photo

CAIRO – 13 February 2020: A large false killer whale, a large member of the dolphin family, was found dead on Wednesday on a beach in southern Red Sea city of Hurghada in southeastern Egypt, an Oceanography official told Egypt Today.

The toothed false killer whale is listed as "near threatened" by the International Union for Conservation of Nature (IUCN). The 5-meter long dead whale was moved to the Institute for Oceanography to disclose the reason of its death, chief of the Red Sea Protected Areas Tamer Kamal said.

Tha false killer whale is a sociable kind of dolphins inside oceans worldwide. It’s known to be social and it feeds on fish, squid and sometimes on other types of dolphins. The placement of the false killer whales in the IUCN’s “near threatened whale” means they face a high risk of extinction.

In May, 2018, while working in a project in the Gulf of Israel’s Eilat, marine biologists were surprised by a blue whale, swimming reportedly only 300 meters from the shore, then it was seen in the Egyptian international waters, in Taba specifically.

In an interview with Egypt Today, Hisham Gabr, head of the Chamber of Diving and Water Sports said that the blue whale was spotted in Egypt’s city of Taba, but no one could capture photos for it. Taba is on the border near Eilat.

In August last year, a video went viral on social media showing a whale in Egypt’s Northern Coastal water, the Minister of Environment assured the citizens that wales could be found in territorial water of North African Countries, especially in the summer.

“Whales are normally found in the Mediterranean and live in the territorial waters of most of the North African countries, including Egypt, as well as the coasts of European countries,” said the Ministry in a statement.

Whales are not predators but people should exercise vigilance and avoid the area of whale as the large ones move randomly when they feel human movements, the statement continued.