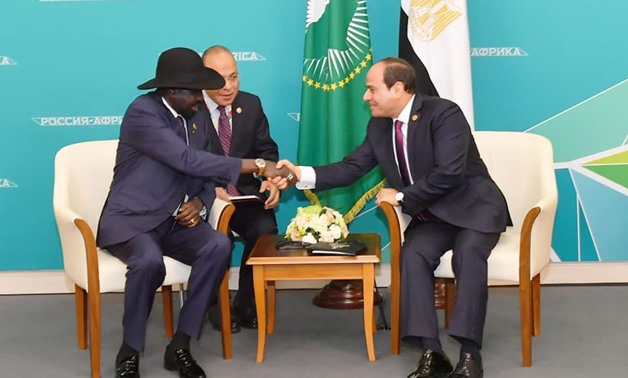 CAIRO – 23 October 2019: South Sudan’s President Salva Kiir on Wednesday praised Egypt’s efforts to back stability in the region and in South Sudan, during his meeting with President Abdel Fattah Al-Sisi, on the sidelines of the Russia-Africa Forum in Sochi, Russia, the Egyptian presidency said in a statement.

Kiir expressed his country’s keenness to continue enhancing the bilateral ties with Egypt in various fields, in light of the brotherly and special relations between the two countries. He also hailed Egypt’s role in advancing development in South Sudan, presidential spokesman Bassam Radi said.

For his part, President Sisi affirmed Egypt's keenness to develop cooperation between the two sides at all levels, especially in light of the deep relations between the two brotherly countries.

Sisi voiced Egypt's permanent support to the government and people of South Sudan and for all efforts aiming at achieving a final political settlement in Juba, especially through the implementation of the provisions of the activated peace agreement.

Egypt will continue to provide assistance and technical support to South Sudan, Sisi said, in a way that contributes to meeting the aspirations of its people for a better future, helps advance the implementation of bilateral projects, and promotes reconstruction in the country.

Kiir, earlier in October, has expressed appreciation for the Egyptian support to the peace agreement in his country, state’s Middle East News Agency reported.

At a meeting with Egyptian Ambassador in Juba Ahmed Bahaa Eddin, Kiir thanked Egypt for its efforts that aim at implementing the peace agreement, said the Egyptian Foreign Ministry in a statement on Friday.

Bahaa Eddin asserted at the meeting that Egypt will continue supporting South Sudan and cooperating with it in all fields especially in the education and health domains, added the statement.