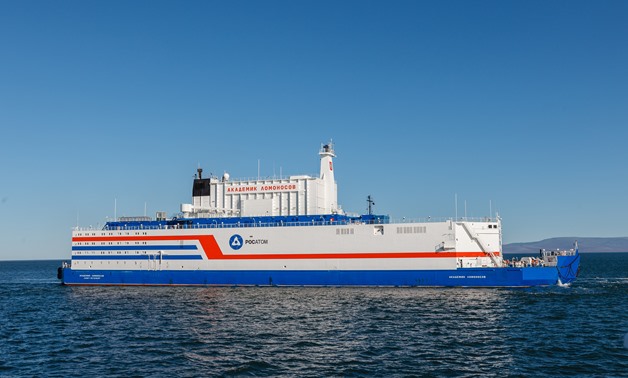 CAIRO - 27 September 2019: Rosatom State Corporation has developed the world’s first ever floating nuclear reactor, which was docked mid-September and is scheduled to begin production by the end of this year. “Akademik Lomonosov” floating reactor, in the Russian port of Pevek on the Chukotka Peninsula, is built to provide electricity and energy for the Arctic where inhabitants experience difficulty accessing traditional energy sources since the area is covered in ice.

The floating reactor consists of an energy unit equipped with the latest nuclear safety technology. This unit was built in shipyards using the same construction technology used in nuclear icebreakers and marine vessels. However, the energy generated by the reactor is not used for passage through the Arctic Sea. It is used to power remote areas, where it is practically very difficult to transfer electricity to land. Coastal infrastructure, such as wave blocks and power lines, is being implemented in the docking site.

Floating nuclear reactors can be used to provide energy to remote islands, desalination and inaccessible coastal areas in northern and southern Russia, and can be used in many countries with similar weather conditions as Russian cold weather. Commercial production of such reactors has not yet been achieved.

Russia has embarked on the production of this new type of reactor because half of the Arctic's four million inhabitants live on the territory of the Russian Federation, and most of the settlements in the far north are inaccessible. While the main source of fuel for power plants in these areas comes from coal and oil, which has a very negative impact on the environment as air and water pollution is damaging the ecosystems in this area.

“This may be a small step towards sustainable development in the Arctic, but it is a huge leap to remove carbon from areas far from the energy grid,” Director General of Rosatom Alexei Likhachev said adding “this is a turning point in the development of small nuclear power plants in the world."

“Akademik Lomonosov” is the first of a new class of small, versatile nuclear power plants that will provide reliable electricity, heat and clean water, helping to achieve Sustainable Development Goals (SDGs). The project is expected to serve as a model for a future fleet of floating nuclear power plants and land-based facilities. Small reactors, and small power units will be available in hard-to-reach areas in northern Russia and the Far East.

Russia's Rosatom has not yet revealed the total cost of the new floating power unit, which arrived in the Russian port of Pevek, citing that this first unit is "Pilot" and expansions to start commercial production stages haven’t started so far. However, the company stressed that this new technology is very competitive and will have a great future, and will provide energy at a cheaper price than diesel and conventional means in the near future. Rosatom exclusively confirms to Egypt Today that the FNPP "Akademik Lomonosov" has been tested several times, and has more advantages than the nuclear icebreakers as they work in safer conditions: nuclear icebreakers float through thick ice several kilometers away from the coastlines. Nevertheless, FNPP will never do any movement, they will be docked on a private platform to stay and perform a specific task. They have a far simpler design than nuclear icebreakers and submarines, which means there is no risk for them to suffer any failure in the self-propelled system or any other movement-related emergencies. Floating reactors are designed in such a way that the probability of radioactive material entering the environment is minimal in the event of a severe accident.

In response to a question about natural disasters such as earthquakes, severe storms, icebergs and their impact on floating reactors, Rosatom confirmed that it is determined to ensure the provision of the safest and most environmentally friendly energy sources in the world. That is while taking into account all possible extreme scenarios, even those which are most likely to happen, when designing a floating nuclear reactor and ensuring its rugged structure. Rosatom added that since the floating nuclear reactor works on the surface of the water, it is not vulnerable to earthquakes, and coastal. Hydraulic structures are installed to provide additional protection against the risk of a tsunami. Dams and wave breakers are also installed, making it virtually difficult for the glaciers to collide with it, and the coastal infrastructure prevents any potential impact either on the beach or on the seabed.

Rosatom added that the maximum waves off the coast of Siberia could be up to 3 meters, and tests for the stability of the floating nuclear reactor are made to withstand waves 20 times higher than 6 meters. The ship carrying the reactor can remain stable amid wind speeds of up to 80 meters per second, which means that no strong storms, waves or floods will cause the floating nuclear reactor to overturn, so there will be no chance of shutting down the reactor.

Rosatom said that despite the precautions taken, a situation was simulated if the floating nuclear reactor tossed into its berth, dumped it on shore and turned upside down, and found that even in such an unlikely event, all safety systems would continue to function normally, the reactors will be protected from any damage or harm.

On how to dispose of the nuclear waste of the floating reactor and its impact on the environment in the Arctic, Rosatom revealed that the nuclear plant should be charged with nuclear fuel every three years; spent fuel will remain on board the floating nuclear power plant first, where it is stored in a storage warehouse, then in dry containers and will never be transported to shore. There is a complete fuel storage complex on board a floating nuclear power plant, and once the floating power unit is towed to a special maintenance facility (this happens several times during the life cycle of the floating power unit and is planned for the first maintenance after about 10-12 years of operation), the fuel is discharged from the unit and sent for processing. After repair and maintenance are complete, the discharged floating power unit is sent back to the berth area, and the fuel and waste management system completely eliminates any risk of radioactive leakage into the environment.

Director of Floating Nuclear Power Plant Construction and Operation at Rosenergoatom Vitaly Trutnev said the main challenge in the construction phase of the floating reactor is the accommodation of two reactors on a relatively small ship while maintaining all the functional characteristics and reducing the number of personnel and crew. That is in addition to the need to take into account ways to ensure the highest levels of rigidity, operability and safety of work without any impact on the environment. Moreover, major difficulties were faced by the company during the implementation of land infrastructure as it had to take into account the special conditions of the Arctic region and the limited navigation periods.

Trutnev explained to Egypt Today that the most notable achievements during the construction and operation of the floating nuclear power unit Academic Lomonosov were the implementation of the task of towing the floating reactor from the construction basin in St. Petersburg to the Atomflot base in Murmansk, passing by the first integrated operational test of the power unit.

Trutnev, an official at Rosenergoatom, a subsidiary of Rosatom, revealed that the design of the Akademik Lomonosov floating nuclear power unit for the Arctic is contributing to a strong energy supply to the Russian region of Chukotka. Trutnev explained that the competitive decisive factor of the floating plant in remote areas is the possibility of reducing the costs of long-distance electricity transmission lines in a remote environment, where these costs are much higher than the cost of generating electricity itself. This would contribute significantly to improving the quality of life in energy-deficient areas and creating great conditions to achieve sustainable development.

The general manager of construction and operation of the floating reactor asserted that putting “Akademik Lomonosov" on the grid saves the consumption of about 200,000 tons of coal and 120,000 tons of fuel annually, either directly or indirectly, stressing on the fact that these types of reactors are necessary for remote areas of the Arctic because they are able to resist dire weather conditions, rigid environmental requirements, while staying compliant with all requirements for accuracy, rigidity and safety, including IAEA recommendations for nuclear and radiological safety.

“Arctic regions do not fall within the Russian national grid of electricity, so the floating nuclear power unit is required mainly in the far north and the far east of Russia as they need reliable and affordable sources of energy. [Such reactors] can also secure power for desalination systems, which attracts the attention of so many African, Asian and European countries who are experiencing severe freshwater shortages,” he added.

Rosatom has more than 300 companies and alliances, employs more than 250,000 employees, has the second largest uranium reserves, holds more than a third of the world's enrichment market share, and is the world's largest construction company for the outstanding generation of nuclear power plants and orders. Portfolio of foreign orders for 10-year period is over $133 billion.

The Russian city of Pevek, where the floating nuclear reactor “Akademik Lomonosov” will be located, is one of the main ports along the Northern sea route. The presence of such a floating reactor in Pevek will provide the conditions for the rapid socio-economic growth in the Chukotka region.