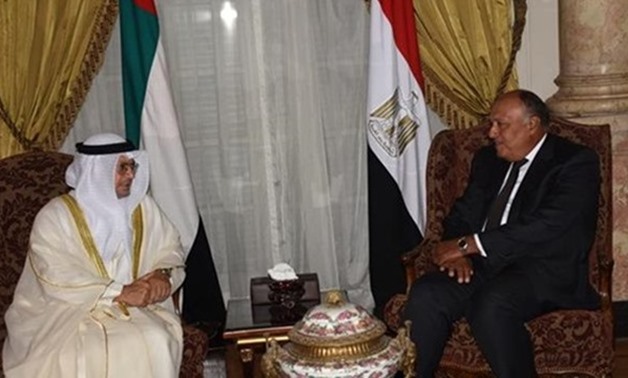 CAIRO - 10 September 2019: Foreign Minister Sameh Shoukry has highly appreciated the common resolve of the political leaderships in Egypt and the UAE to promote the two countries' relations to cope up with the level of historical and popular ties.

The Egyptian top diplomat's remarks were made during his meeting with UAE Minister of State for Foreign Affairs Anwar Qarqash at el Tahrir Palace in Cairo ahead of the start of the regular session of the Arab League Council at the foreign ministers level.

The meeting took up means of enhancing bilateral relations and common viewpoints regarding a set of issues of common interest.

Meanwhile, the UAE minister expressed his country's keenness on fostering ties with Egypt with the aim of achieving common interests, he added.

The spokesman also said the meeting covered continuing consultations and coordination over regional developments along with efforts to combat terrorism.