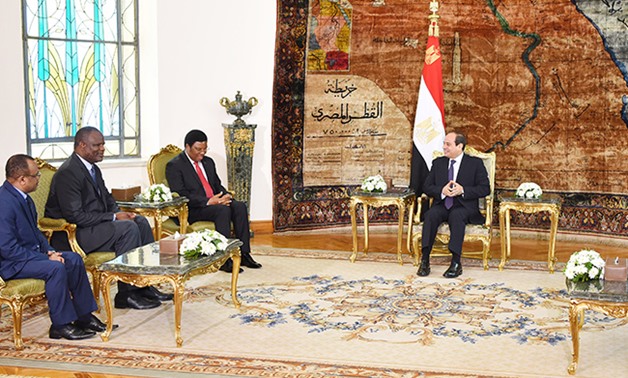 CAIRO – 10 July 2019: President Abdel Fatah al-Sisi received Tanzanian Prime Minister Kassim Majaliwa at the Ittihadiya Palace, where they discussed the developments in the bilateral relations of the two countries.

During the discussions, President Sisi assured commitment to enhancing joint cooperation in different fields, increasing joint investments and exchanging expertise in major national projects, in a way that meets both countries’ interests.

For his part, Tanzanian Prime Minister Majaliwa hailed Egypt’s achievements on the economic reform level, and the country’s establishment of big national projects.

Majaliwa expressed his country’s keenness to increase the bilateral trade volume with Egypt to maximize the utilization of potentials and capabilities possessed by both states. He further stressed that Tanzania seeks to support Egyptian companies and businessmen interested in investing in different sectors.

The Tanzanian prime minister also said that his country is looking forward to benefiting from the Egyptian expertise in establishing a new capital for Tanzania, in light of Egypt’s achievement in building the New Administrative Capital.

In this context, Sisi explained that “the New Administrative Capital is not only a smart and developed city that meets the international standards, but also is considered a model to shape a better reality that contributes to the government’s transformation to digital economy, and smart administration, which will create a boost in the quality of services, and citizens’ lives.”

Majaliwa also congratulated President Sisi for his effective leadership of the African Union during the current term, which was marked by the launch of the African Free Trade Area agreement in Niger.