Challenges of integration in European countries 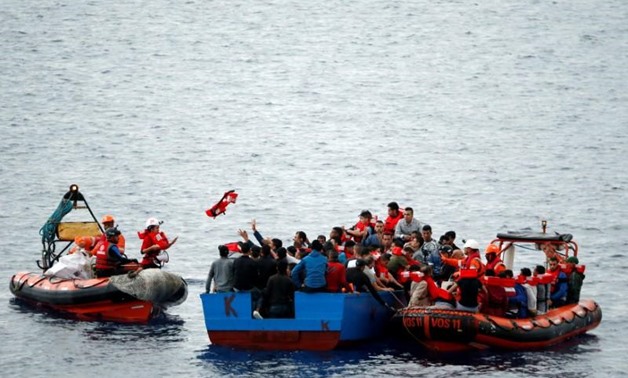 Hundreds of migrants rescued in boats off Libyan coast

CAIRO - 3 June 2019: Immigration to Europe is no longer confined to people who seek jobs and a more stable and abundant economic life. It is now a refuge for fugitives from civil wars, armed conflicts and terrorist operations in countries such as Syria, Libya, Iraq and elsewhere.

This increase in immigrants' numbers leads to the need for more international efforts, especially by the European Union, to provide successful treatments capable of delivering sustainable solutions to the bloody conflicts in the Middle East.

Migration is not only linked to violence and war but also to poverty and unemployment, which are the main drivers of migration from the South to the North.

Economically, the migration crisis has led to rethinking the integration programs that were followed by various European countries. The large numbers of arrivals from war zones and conflicts imposed a reevaluation of the feasibility of these programs and the search for means of strengthening them.

The issue of integrating newcomers in the economic and social life is the most prominent challenge for all countries of the European Union;these countries aim at providing immigrants with the opportunities to improve the economy and enhance political diversity.

However, a series of studies and reports from various statistical institutions, including the Eurostat, shows that despite the large numbers of immigrants in European countries, their participation in the labor market remains low.

Through previous experiences of a group of countries, we conclude that any integration of any human being into the labor market depends not only on their skills and experience, but on the living conditions, geographical distribution, incentives available to employees and the level of education they receive.

In Germany, for example, government integration projects for newcomers have improved their access to the labor market, prompting them to study the language faster (in most cases) and push for the integration of their families into surrounding communities.

In France, where migratory workers (mostly from Morocco and Algeria) contributed after World War II to the economic wheel of the country and thus created more jobs, giving immigrants additional reasons to integrate into the surrounding communities.

Education also plays an important role in the integration of immigrants into new societies. Studies also confirm that children are guaranteed access to schools when they arrive in the country and adult language education programs are available.

However, some countries lack experience and resources to provide appropriate schools for children.

It is worth mentioning that failing to teach the language to adults affects their social relations, and thus the relations of their families with society, and promotes poverty and social exclusion as well as a permanent sense of alienation and non-identification with host communities.

For his part, Moroccan writer and researcher Montaser Hamada said during his interview on Sky news that integration is problematic due to the fact that European culture and doctrine are completely different from Muslim and Arab immigrants' culture.

He added that Western governments and immigrants shoulder the responsibility of overcoming this dilemma, as governments did not address development in the migrants' communities and migrants were influenced by extremist rhetoric promoted by some Islamic movements.

"Integration requires more effort from Arab and Muslim communities," said Ahmed Saadoun, an immigration and refugee expert, saying "A large number of immigrants lack academic degrees, and some cannot even answer in the language of the country where they live."

In 2018, The United Nations issued a report revealing the number of illegal immigrants to Europe by land since the beginning of 2018 that has increased seven times over the same period a year earlier to about 18,000 and indicated that they often arrive via Turkey towards Greece.

The International Organization for Migration (IOM) also said about 47,500 migrants had arrived in Europe via the Mediterranean since the beginning of 2018, compared to 129,000 in the same period of 2017.