By: Egypt Today staff
CAIRO – 18 June 2019: The State Information Service criticized in a statement on early Tuesday tweets made by the Human Rights Watch on Morsi’s death.

“Human Rights Watch’s tweets on Morsi’s passing... amount to nothing but political exploitation in the name of Human Rights

In a new ethical low for Human Rights Watch, Sarah Leah Whitson, Director of the Middle East and North Africa division of HRW, published a number of tweets on her account regarding the circumstances of the passing of the deposed president, Mohamed Morsi. Whitson’s tweets contained nothing but false claims that reaffirm HRW's tradition of "circulating lies”. The allegations made by the tweets were as follows:

1. Whitson accused the Egyptian government of causing the death of the deceased deposed president through what it termed as criminal negligence by not providing him with adequate healthcare. She also used the deceased deposed president’s passing to give credence to such claims and apply them broadly to all inmates serving sentences in Egyptian prisons.

4. The deceased deposed president submitted his last official request to the court regarding his health condition on November 19th, 2017 asking to be treated on his own expense and the court approved his request. This further demonstrates how false Whitson’s allegations really are.

The conclusions that Whitson has reached in her tweets are nothing but an attempt to prematurely reach outcomes with the most politicized intentions. Furthermore, HRW has reached a new low by attempting to take advantage of the death of an Egyptian citizen to make political statements, and unfounded criminal accusations that have no relation whatsoever to human rights work.” 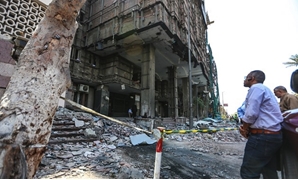