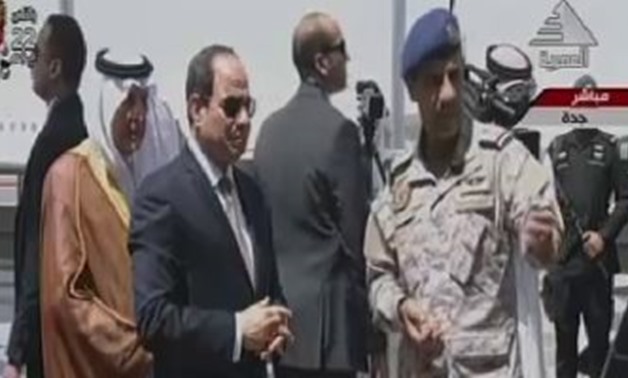 CAIRO – 30 May 2019: Upon President Abdel Fatah al-Sisi's arrival in Saudi Arabia to attend the Arab, Gulf and Islamic summits due on Thursday and Friday in Mecca, he was updated on the Arab Coalition Forces’ campaign against Iran-backed Houthis.

Coalition spokesman Colonel Turki al-Maliki updated President Sisi on details of the coalition military operations and Houthis’ attacks against the kingdom. Sisi also saw remains of Houthis’ rockets that were intercepted by the Saudi-led forces in Mecca.

In March 2015, Arab and Gulf countries formed the coalition forces from air and ground fighters to target Iran-backed Houthis after capturing the Yemeni capital, Sanaa.

President Sisi headed to Saudi Arabia on Thursday. He will deliver a speech at the Arab emergency summit on Egypt's comprehensive vision of preserving the security and stability of the region, said Egyptian presidential spokesperson Bassam Radi in a statement.

Sisi will also hold several bilateral meetings with Arab and Gulf leaders on the sidelines of the two summits, Radi added.

Saudi King Salman bin Abdul Aziz Al Saud called for Gulf and Arab summits in Mecca on May 30 and this comes in conjunction with the 14th summit of the Organization of Islamic Cooperation (OIC).

Egypt stressed its deeply-rooted ties with Saudi Arabia and expressed solidarity with the kingdom in the face of any attempt seeking to destabilize it.

Also, Egypt accentuated the importance of security and strategic coordination in the face of the Iranian threats in light of the attack on the ships in the territorial waters of the United Arab Emirates and the Iran-backed Houthi militias’ drone attack on two oil pumping stations in the kingdom.