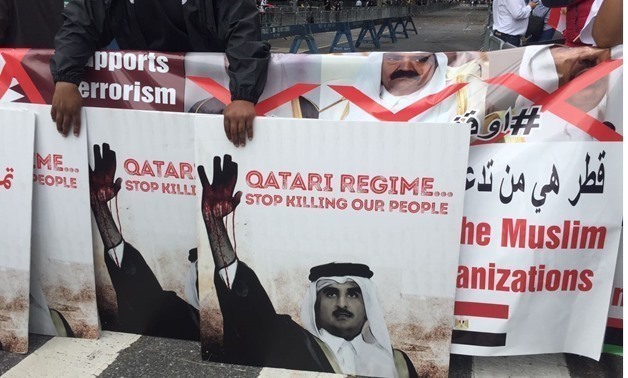 CAIRO- 27 MAY 2019: The Arab Council for Human Rights and Fair Trial has criticized Qatar and Turkey for using money as a weapon to change the human rights climate in the African and Middle Eastern region.

Chairman of the Arab Council for Human Rights and Fair Trial Abdel Gawad Ahmed, stated that Qatar has hindered furthering the development of the Muslim and Arab people by financially supporting Israel. Furthermore, the council has also criticized Qatari-based media outlet “Al-Jazeera” for allegedly fabricating harmful news stories about Egypt in an attempt to sabotage the Egyptian state’s reputation.

“We will not accept Egypt to be targeted by Qatar or any other country,” said Ahmed, adding “there is a need to defend the civil and human rights of the people from Qatar who have distorted the Egyptian people’s image in order to preserve the development of the human rights movement in the region."

Furthermore, the council has also criticized Qatari-based media outlet “Al-Jazeera” for allegedly fabricating harmful news about Egypt in an attempt to sabotage the Egyptian state’s reputation.

Qatar has had a turbulent relationship with African and Arab countries over the past several years.

On February 13, military experts exposed Qatar for providing faulty and inefficient military equipment to Mali and Somalia. Armored vehicles were donated by the Qatari Ministry of Defense (MoD) to combat jihadist terrorism.

However, the vehicles were vulnerable to landmines, explosives and IEDs, hencecreatingdoubts on the intentions behind Qatar’s donations of heavily used armored vehicles.

African military experts believe that Qatar intentionally provided worn-out Turkish military vehicles to these two countries because they are supporting terrorist organizations in the African continent.

Qatar has also had a problematic human rights record over the past several years.

Qatar has faced international backlash because of discrimination againstforeign workers who have been building several infrastructure projects in preparation for the 2022 World Cup set to be hosted in Qatar.

In November 2018, the workers' wages were reduced despite increasing their working hours, a decision which violates international labor law and human rights covenants.

Sources have told Egypt Today that over 1,000 workers have died while working due to long working hours in extremely hot weather without sufficient food or water.

It is unclear whether FIFA or other international organizations will take action against Qatar for its exploitation of foreign workers.