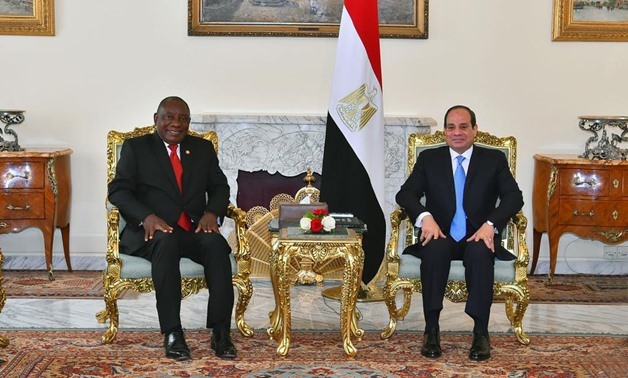 CAIRO – 18 May 2019: President Abdel Fatah al-Sisi will attend the inauguration ceremony of South African President Cyril Ramaphosa due to be held next Friday at the Loftus Versfeld Stadium in Pretoria, announced South African Minister of Presidency Nkosazana Dlamini Zuma.

“The president [Ramaphosa] invited heads of governments of SADC countries and the presidents who chair economic blocs like ECOWAS (the Economic Community of West African States), and the president who is chairing the AU,” the Minister said in a press conference on the preparation for the inauguration on Thursday.

Being the head of the African Union (AU) in 2019, President Sisi will head a high-profile delegation, in light of enhancing the bilateral relations. In a phone call on May 12, President Sisi congratulated President Ramaphosa for his new term in presidency.

Ramaphosa had paid Egypt an official visit on April 22, during which he discussed with president Sisi the ways of enhancing the bilateral relations and African development strategies in light of Egypt’s chairmanship of the African Union, according to a statement from the Egyptian presidential spokesperson Bassam Radi.