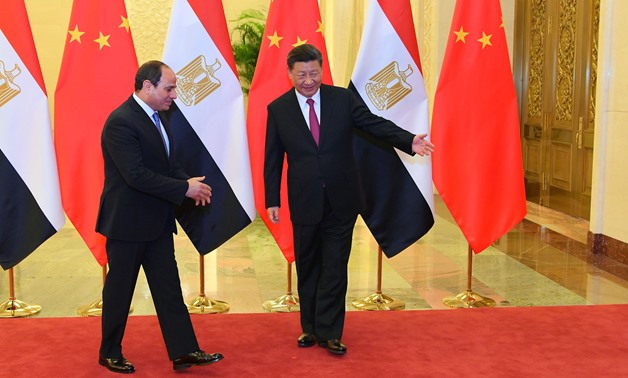 CAIRO – 25 April 2019: In his meeting with Chinese counterpart Xi Jinping, President Abdel Fatah al-Sisi affirmed that Egypt’s current leadership of the African Union has an important strategic dimension for the Belt and Road Initiative (BRI), said Egyptian presidential spokesperson Bassam Radi in a statement on Thursday.

“President Sisi affirmed that Egypt’s current leadership of the African Union has an important strategic dimension for Egypt’s active participation in the Belt and Road Initiative, in light of Beijing’s keenness of strong coordination with Africa to achieve its developing priorities,” the statement read.

President Sisi also highlighted his country’s support to the Chinese development projects that come under the Belt and Road Initiative, Radi said, adding that the President added that Suez Canal Development Corridor, where a Chinese Industrial Zone is being established, is a point of convergence between Egyptian and Chinese cooperation

The Belt and Road Initiative was launched by the Chinese government to enhance trade, investments, and infrastructure in than 150 countries in Asia, Europe, Middle East, Africa, and Latin America. The initiative is a revival to what was known as “The Silk Road.”

The second edition of BRFIC is taking place on April 25 - 27, and attended by 37 heads of state, the United Nations secretary-general and the managing director of the International Monetary Fund (IMF). That is in addition to 5,000 from more than 150 countries, and 90 international organizations, reported CGTN.