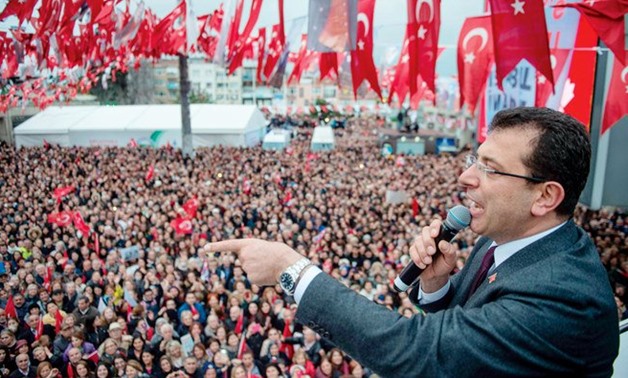 Erdogan’s Justice and Development Party (AKP) got most votes nationwide in the March 31 election but its loss of the capital Ankara and Istanbul, the country’s economy hub, was a major setback after a decade and half in power.

The AKP had demanded a recount and vowed to appeal for a new vote in Istanbul, citing alleged irregularities, after the opposition Republican People’s Party (CHP) won the city by a slim margin.

The Supreme Electoral Council, known by its Turkish initials YSK, must now rule on whether the AKP’s formal demand for a new election has any merit.

“We have come here to submit our extraordinary request for the election for the Istanbul metropolitan municipality to be annulled and repeated,” AKP deputy chief Ali Ihsan Yavuz told reporters outside the YSK.

Local media showed images of AKP officials wheeling suitcases containing what they said was evidence of electoral irregularities into the YSK headquarters in Ankara.

It was unclear how long YSK officials could take to rule on the appeal, but lingering uncertainty over the Istanbul result more than two weeks after the ballot is one factor worrying foreign investors and weighing on the lira.

A new Istanbul election would be held in June 2 if the appeal is recognized, according to local media.

A recount of void ballots in Istanbul is still ongoing after the AKP said it found irregularities in several districts.

Opposition candidate CHP Ekrem Imamoglu has accused the AKP of “unfair play” and declared himself mayor. But the margin between him and the AKP’s Binali Yildirim remains very tight.

A defeat in Istanbul would be especially sensitive for Erdogan, who grew up in one of its deprived neighborhoods and built his political career after being Istanbul mayor himself in the 1990s.

The AKP has won every election since it came to power 17 years ago. But voters appeared to punish the party this time after a currency crisis last year badly hurt Turkish households and pitched the economy into recession.

Erdogan himself has described the Istanbul vote as marred by “organized crimes” and last week called for the ballot to be annulled.

After the ballot, electoral authorities had said CHP’s Imamoglu was ahead by nearly 30,000 ballots. But that margin has narrowed to around 14,000 after a recount of void ballots over the last fortnight.

The CHP said on Tuesday the margin was now around 13,800 ballots in favor of its candidate with only around 80 ballot boxes left to count. Each candidate had won around 4 million votes.

Although he was not personally running in the election Erdogan campaigned hard in the city, presenting the vote as a matter of national survival. He put forward Yildirim, a former premier and AKP heavyweight, as the party candidate.

Imamoglu, a former mayor of a local Istanbul district, ran a low-key campaign, rallying door to door to talk over local issues. He is already being credited with having revived the opposition’s profile nationwide.