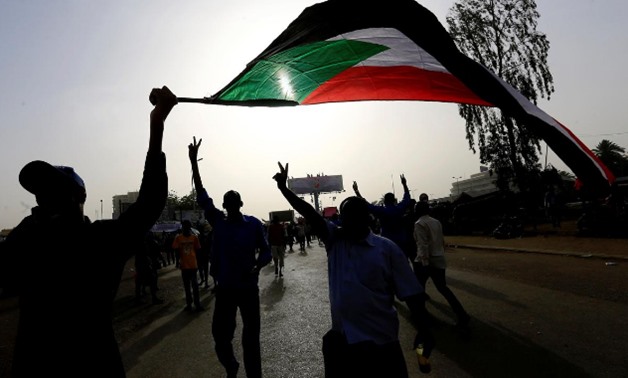 Sudanese demonstrators wave their national flag as they arrive for a protest rally demanding Sudanese President Omar Al-Bashir to step down outside the Defence Ministry in Khartoum, Sudan April 11, 2019. REUTERS/Stringer

CAIRO – 11 April 2019: Egypt expressed its “full confidence” in the ability of the Sudanese people and their “loyal” national army to overcome the challenges of such “decisive” stage and meet the Sudanese people’s aspiration to achieve stability, progress and prosperity.

The Egyptian Foreign Ministry affirmed in a statement Egypt’s full support of the choices made by the Sudanese people, voicing respect for their will in shaping the future of their country. The ministry also stressed Egypt’s unchangeable stance toward respecting the sovereignty of Sudan and its national decision.

The ministry called on the international community to support the choices of the Sudanese people in this “historical decisive stage.” It also urged the brotherly countries to help Sudan achieve a peaceful transition toward a better future, in a way that meets the people’s aspirations.

“Egypt is following closely and intensively the current and accelerating developments in the brotherly Sudan at this momentous stage in its modern history,” the statement said.

“Egypt will continue to support the Sudanese people and government until stability and prosperity are achieved,” the ministry added.

In March, Ibn Auf met with Egypt’s President Abdel Fatah al-Sisi in Cairo, where the former praised Egypt's unlimited support for maintaining the safety and stability of Sudan, according to Egypt's presidency spokesman Bassam Radi. Ibn Auf expressed his country's aspiration to take advantage of the leading role Egypt plays in the region, and its inspirational development experience.

During the meeting, Sisi congratulated Ibn Auf for assuming his new post as Sudan's first vice president, saying that it reflects a belief in his capabilities and his vision on achieving stability, development and prosperity for the Sudanese people.

Sisi affirmed Egypt's full support of Sudan's security and stability, considering it as an extension of the Egyptian national security.