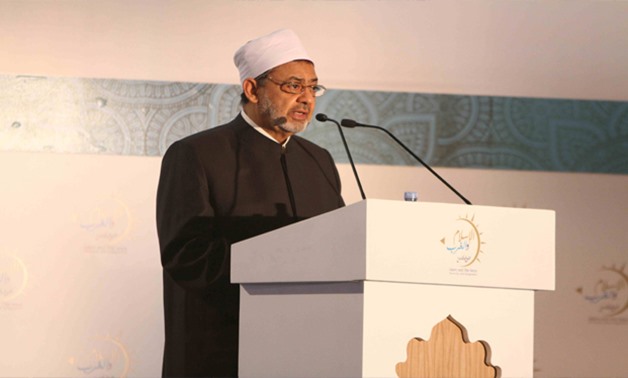 CAIRO - 2 February 2019: Grand Imam and Al Azhar Sheikh Ahmed al-Tayeb wrote the editorial of The Voice of Al Azhar magazine on the issue of religious discourse renewal. Below are excerpts of the article that was published this week.

Many media personnel have been tackling the idea of “Religious Discourse Renewal” which is becoming increasingly ambiguous for recipients due to the lack of scientific bases needed to identify the meaning of renewal, what discourse that must be renewed, and if what they call “religious discourse” is the only reason behind all the crises that the Arab World goes through on the security and political levels, and all the obstacles hindering its development and growth.

The most evident proof of that state of ambiguity is that some of those voices are calling for discarding the religious discourse altogether. Those do not disclose the target of their calls which have as purpose turning Al Azhar institution into a museum including its academic, spiritual, and cultural aspects after more than ten centuries, and after the East and the West recognized it as the oldest and largest university worldwide.

On the contrary, we hear other voices that merely understand religious discourse renewal as a return to what early Muslims were in the first three centuries succeeding the advent of Islam. Those also dream of the day they seize Al Azhar, and impose their perception of religion exclusively. Those compose a threat to the religion’s tolerance, and its Sharia that was established upon pluralism and variety of opinions enjoying a freedom that is unrivaled in any other religion.

Those cannot bear Al Azhar’s openness to both congruence and difference upon the religion’s fundamentals, direct texts, and comprehensive frameworks. The debate over other religious aspects is already unrestricted.

Based on this approach to diversity, Al Azhar has always been open to the study of all religious school of thoughts, whether Sunni or not, in a proper academic way without adopting a derogatory predisposition on any of those school of thoughts or their scholars. That approach was used by Al Azhar to teach the whole world rhetoric and other disciplines.

I question where in any part of the Arab or Islamic world we find a case of a female child who has not reached puberty and was wedded to an adult man. Where is that phenomenon on which debate is heating up?

Why is the apostasy penalty being evoked in debates to attack the patrimony? Did not criticizers see Egyptian atheist youths who show off their atheism on satellite TV channels, debate freely, and assert that their numbers are big?

Who of those was subject to apostasy penalty or any kind of harm? I myself spoke a lot about atheism, and atheists. Have I ever called for applying the apostasy penalty?

Those TV shows waste the time of Egyptians, and mess up with their unity, focus, and attention to what is being plotted against their country. Those shows deal with ghosts that do not exist in reality in Muslim-majority countries. It is funny how those claim they are assuming religious discourse renewal, and that divinity sent them to assume that mission. Their confidence is enviable.

As for renewal, I summarize my vision below:

Renewal is concurred by the prophet as he said it should take place at the beginning of each century. Also, renewal is needed to understand God’s teachings on the variables pertinent to each era.

There was a controversy among scholars to determine what the prophet had meant by renewal, who should assume that mission, and whether it should be done by one scholar or many. Old scholars stated that renewal means getting back to Quran and Sunna, and eliminating any concepts that negatively impacts them.

What we will discuss in the April’s big conference is whether we should confine renewal to that simple meaning or not? That is because that concept of renewal would leave the contemporary dilemmas as they are without finding solutions and determining the stance of Sharia on them.

We have to determine if we should instead look thoroughly into Quran, Sunna, and religious teachings, and review them in accordance with the bases set by scholars.
I will tell you the answer I gave ten years ago in a conference by the Ministry of Endowments. That is renewal is an integral part of Islam. Otherwise, Islam would be just rituals practiced in Mosques, cymetries, and in some occasions.

It is strange that the “renewal” terminology is still viewed with suspicion because of the accusations, sometimes valid and some other times invalid, leveled at anyone who approaches it.

The renewal we are waiting for should go in two parallel paths:

One path must focus on Quran, Sunna, and the patrimonial principles that match the era’s concepts and not demands. The religious discourse is not expected to be totalitarian but it has to be free of conflict, the seclusion of the other, and the dominance of a school of thought over the other.
The other line must find a common ground between Islamists and Liberals to mend the typical division upon patrimony and modernism.

That difference in itself is normal and an acceptable phenomenon. However, what is neither acceptable nor normal is that the situation shifts from an external battle into an internal conflict that creates a void that allows a foreign intervention that crashes everyone.

We can infer from the experience we got in the last century that those who belong to the former ideology thought they would be able to live within the narrow framework of patrimony, and shut the door in front of the waves of the Western civilization and its flowing culture. Their determination did not achieve their desired results so they retreated without equipping the society to deal with international variables in an informed way.

The same can be said about the Westernized who mocked and renounced the patrimony as a requirement to assume reforms. The result was that the masses turned their back to them after they had realized they do not represent their sufferings and dreams. Those lost the battle and did not resolve one single social issue. We can even say they made them worse.

The moderate reform movement is the most capable of assuming the renewal mission without deforming or canceling religion. That is in one condition which is avoiding conflict with different parties as that would suck its energy.

Now, we should prepare a list of the most pressing issues. I prioritize the matters that formed the principles of the creed of terrorist groups such as jihad, caliphate, takfir, loyalty, and others.

The conclusion by scholars on those matters in the conference must be compiled in a report, translated, and sent to all embassies.

Studies of those matters must be a collateral effort. It can no longer be an individual effort because of the diversification in specialities and conversion of religious affairs.