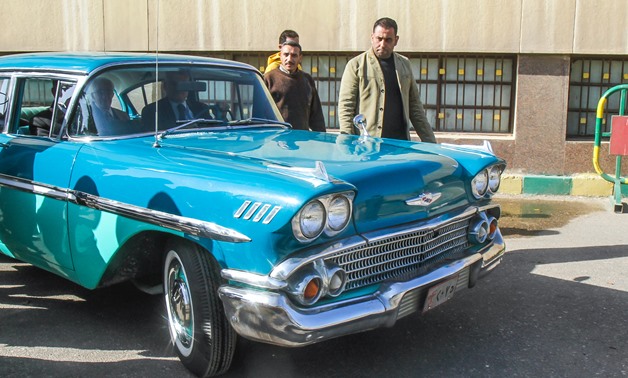 CAIRO – 3 January 2018: Deep in the night, a soft voice whispered into the ears of Minister of Water Resources and Irrigation Mohamed Abdel Ati the historic importance of President Abdel Nasser’s vehicle that he drove whilst the Aswan Dam was being constructed.

That night was the start of the ministry’s journey towards restoring the vehicle.

Engineer Ashraf Seidhom, Director of the Mechanical Sector in the Minister of Water Resources and Irrigation, was handpicked by the Irrigation Minister to talk to us about the journey and the historic importance of the vehicle.

Seidhom revealed that he, along with a team, went to the storage areas in the Shobra region in Cairo, which belong to the ministry, to look for the vehicle in question. Upon finding it, Seidhom called the minister and informed him that they have found the vehicle but that they face difficulties in moving it.

Seidhom found that the only solution is to deconstruct the whole vehicle and to start working on all parts; all parts needed restoration. During the next ten consecutive days, the ministry worked on moving the vehicle, after it was left without attention for 30 years and offered for sale or LE 1,000.

It was a piece of junk when restoration work started, something that is evident from what Seidhom told the minister. “It is junk, Minister,” Seidhom said.

Moments of silence passed by.

“Restore it,” the minister said.

“To be even clearer: I want it in mint condition.”

Seidhom waked out of the minister’s office, feeling the huge weight on his shoulders. He had just been told to embark on a near-impossible mission.

Fortunately, fate did not stand it the face of Seidhom and his team.

He spoke to the company who manufactured the vehicle. However, they had stopped making spare pieces for the vehicle in question. Even the most famous markets that sell spare pieces did not have the required pieces.

Left at a dead end, they had to preform some reverse engineering: Technology was the answer. Spare parts were designed, a maquette was made, and the spare pieces were made in a factory.