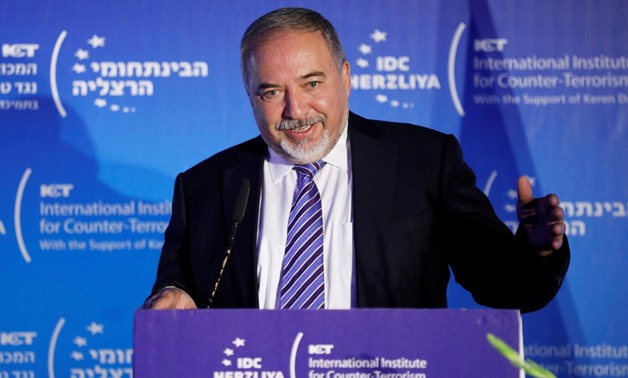 CAIRO - 14 November 2018: Israeli Defense Minister Avigdor Lieberman announced his resignation in a Yisrael Beiteinu meeting at the Knesset on Wednesday, objecting the Egypt and UN-brokered ceasefire that took effect a day earlier between his country and Hamas.


Lieberman described the truce as a “surrender to terror,” saying it would harm Israel’s security on the long run, according to Jerusalem Post. He added that his country’s response to Hamas rocket attacks was not enough and reflects “weakness,” and that there should be more attention to the “south” where Hamas is not eager to achieve “coexistence” or recognize the Israeli state.


Yisrael Beiteinu party led by Lieberman withdrew from the ruling coalition making up the government and holding 61 out of 120 seats in the Knesset. The coalition includes Likud, Bayit Yehudi, Shas, Kulanu, United Torah Judaism, and started ruling in 2015.


Legislative elections were scheduled to take place in November 2019, but are most likely to be held at the beginning of the year. Lieberman demanded the coalition to make a quick decision about those prospective elections.


Lieberman’s office denied the statement issued by the Israeli prime minister's office, saying the cabinet ministers “had unanimously agreed to the decision.”


The publication reported that Lieberman’s response to questions on the reason he had not resigned amid previous ceasefires was that "you can't always get everything you want. As long as I could influence from the inside I stayed. There were turning points that no longer allowed me to fulfill my role in the cabinet."

CAIRO - 10 November 2018: Reuters reported that Qatar has granted "Palestinian civil servants in the Gaza Strip" $15 million cash funds describing the act as "offering Hamas a potential domestic reprieve." However, it reported that Israel denied the money would go to the Islamist group.


In 2012, Lieberman resigned from his position as foreign minister after he had been charged with fraud and breach of trust.

Political Science Professor at Cairo University Tarek Fahmy commented on the ceasefire in Al Ghad TV channel on Wednesday, expecting it would be broken by both parties, and that there would be attempts to resume the entry of fuel to Gaza Strip which was halted last week, and rehabilitate Gaza.


A week of violence


Palestinian sources told BBC that an Israeli unit was about three kilometers inside the Gaza Strip east of Khan Younes, executing a covert operation on Sunday. The unit that was riding in a civilian vehicle shot dead Nur Barakeh, a commander of the Izzedine al-Qassam brigades, Hamas' military wing.

As a consequence, Hamas elements fired back, killing an Israeli soldier and injuring another. Israel responded using tanks and aircrafts, which has resulted in seven casualties among Hamas members, and the killing of a Palestinian civilian.


Hamas fired more than 460 rockets into Israel since Nov.12 night until the ceasefire was declared. One Israeli person was killed and 28 civilians were injured. On the other hand, Israel launched airstrikes against 160 militant targets.


Protests in Gaza have been ongoing since March 30 marking the “Land Day.” Those have resulted in the killing of more than 220 Palestinians by Israeli forces.

A Palestinian protects himself from inhaling tear gas at the Israel-Gaza border during a protest demanding the right to return to their homeland, in the southern Gaza Strip April 6, 2018. REUTERS/Ibraheem Abu Mustafa