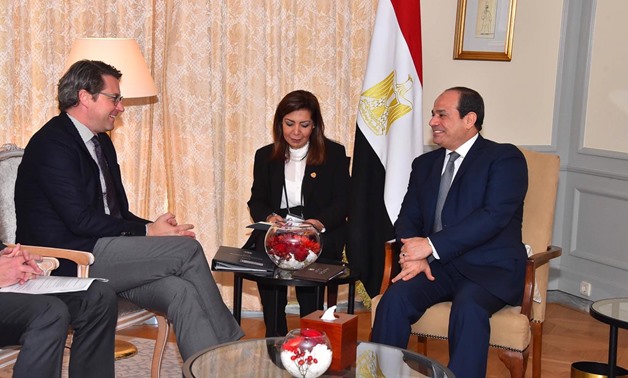 CAIRO – 31 October 2018: The Egyptian President had received Wednesday the German Ministers of Transport, Interior and Foreign Affairs, in his residence in Berlin, before he concluded his four-day visit, during which a number of agreements in education and investment have been signed by the two states.

During his meetings with the German ministers, President Sisi affirmed the importance of raising the levels of cooperation and coordination between Egypt and Germany, and enhancing bilateral relations which have lasted for dozens of years.

Sisi and Scheuer reviewed the huge national projects that have been already implemented, and the investment efforts Egypt made to improve the transport infrastructure and construct new cities including the country’s New Administrative Capital, which requires providing various services, with transportation on the top of them.

In this regard, Sisi stressed Egypt's keenness to cooperate with the German side and benefit from its pioneering expertise in supporting the Egyptian efforts aiming to modernize the railway system, and improve its capability, according to Radi.

For his part, Scheuer emphasized his country's keenness to develop bilateral relations with Egypt in various fields, affirming his readiness to discuss ways to improve mutual cooperation in the field of transport and digital infrastructure, Radi added.

The Egyptian President had received Wednesday the German Ministers of Transport, Interior and Foreign Affairs, in his residence in Berlin – Press photo
Interior Minister

Meeting German’s Interior Minister Horst Seehofer, Sisi hailed the progress in the relations between the two countries in the field of security cooperation, terrorism and extremism combat, said the Presidency spokesman.

Seehofer lauded the achievements of the Egyptian government in economic and social reform, besides its efforts in strengthening security and stability during the recent period. He also highlighted Egypt's success in halting illegal immigration by securing its coasts, and praised Egypt’s remarkable progress in terrorism combat.

The President also affirmed the importance of enhancing cooperation in the fields of training, information exchange and the provision of equipment, which are required to enhance Egyptian capabilities in the combating terrorism and illegal immigration.

Sisi stressed the need to intensify the efforts of the international community and adopt a comprehensive strategy that seeks to address the causes of such problems by supporting economic and social development efforts, Radi added.

Stressing the important partnership between Egypt and Germany, the German Foreign Minister Heiko Maas affirmed his country’s keenness to enhance coordination with Egypt, referring to the pivotal role Egypt is playing in the African continent and the Middle East.

Maas praised the economic developments Egypt has witnessed, stressing his country's keenness to encourage more German companies to invest in Egypt, in light of the outstanding experiences of German companies in the Egyptian market, said Bassam Radi.

In July, Sisi inaugurated three giant electricity plants, provided by the German’s Siemens, to produce electric power for 40 million citizens, in addition to the provision of power to companies and factories for many years to come.

The German Foreign Minister was keen to listen to the President's vision regarding regional developments and the updates of the crises witnessed by the Middle East region, Radi said.

Giving further details about Sisi’s foreign policy vision, Radi said that the President affirmed that the developments and challenges facing the Middle East require the international community to enhance its efforts to find solutions to these crises.

The President explained that such crises in the Middle East are also threatening the security and stability of the whole region and the world, referring to the situation in Syria, Libya, Yemen and Somalia, according to Radi.

Sisi reiterated Egypt’s stance on the Palestinian cause, stressing the importance of pushing forward the peace process between the Palestinians and Israelis. He highlighted the need to reach a just and comprehensive peace settlement between the two sides, which would forever end the conflict.