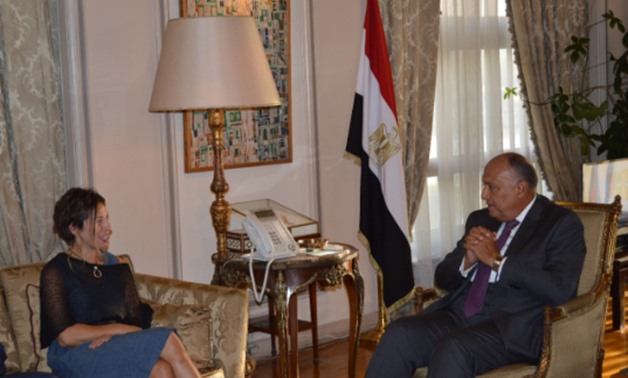 According to a statement issued by the Ministry of Foreign Affairs on Oct. 2, Shoukry and Farha discussed Egypt’s latest achievements to boost the level of housing and achieve social justice among Egyptians.

Shoukry welcomed Farha saying that her visit to Cairo is considered a first step towards establishing further cooperation between the Egyptian government and the United Nations Human Rights Council, with which Cairo is extremely keen to develop relations.

During the meeting, Shoukry affirmed that the Egyptian government recognizes the importance of all human rights, including economic, social and cultural rights. He added that President Abdel Fatah al-Sisi has repeatedly stressed that all of these rights are part of his vision.

Farha discussed with Shoukry the results of all her meetings with the Egyptian officials during her visit. She affirmed that Egypt is exerting great efforts to fulfill its obligations to its citizens regarding human rights, especially the housing rights.

During his speech at the high-level General Debate of the 73rd session of the UN General Assembly (UNGA 73), Sisi asserted that Egypt has a firm constitutional base for the preservation of human rights, pointing out that it achieved wide leaps, especially in the empowerment of women and youths.

“Women in Egypt now occupy 25 percent of the country’s ministerial posts and more than 15 percent of the Parliament’s seats, in addition to the numerous young people who serve in leading positions.”

Sisi also stressed the necessity of reaching peaceful solutions for international conflicts, which is considered the fundamental aim behind the creation of the United Nations. He also highlighted the "urgent need to mobilize resources to help countries emerging from conflicts to rehabilitate their institutions, without intervening in their domestic affairs or violating their sovereignties."

“Arabs are still reaching out for peace… our people deserve to get this sad page in their history folded,” Sisi added.