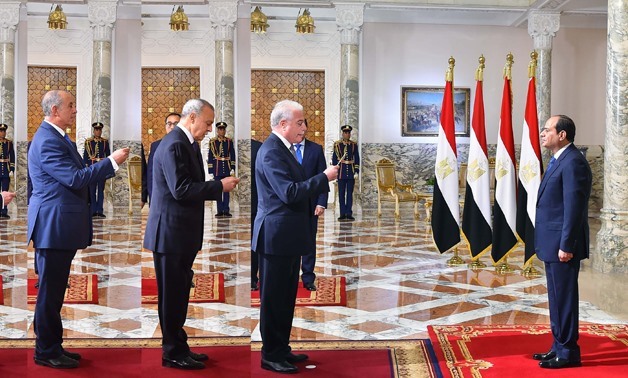 What is the role of Egypt’s governors?

CAIRO – 1 September 2018: Twenty-seven governors including 21 new ones swore the constitutional oath Thursday before President Abdel Fatah al-Sisi; five governors will remain in their posts, while former Damietta governor Ismail Taha was transferred to the post of Kafr al-Sheikh governor.

Following their appointment political science professor Mostafa Elfeky said to CBC’s “Yahdth fe Masr” (Happening in Egypt) program that a governor's job in Egypt is the most difficult job within the country, explaining that it has “specific validity, unlimited budget and great responsibility.”

He stated that the new governmental law is not issued yet, wondering when this law will see the light. The draft law is expected to be passed during the fourth session of Parliament, which starts early October. According to the new draft law, the governors will be granted full powers, which enable them to perform their duties in an optimum manner, in addition to granting local units an independent budget.

Many politicians stated that this new law will reduce corruption at different levels and is expected to produce better results, as it is believed that different governorates need different things; training local leaders will allow them to capitalize on the issues facing their own governorate and find solutions for it.

In line with this, previously, in press statements, Wadhah al-Hamzawi, former governor of Sohag, said, “The governor used to first come forward to the municipal council of his governorate before he could allocate any plots of land for investment purposes, and now he is obliged to present any development plans to the Cabinet during its meeting with the governorates, which takes only four hours.”

Former Minister of Local Development Ahmed Zaky Abdeen said that the former local councils did not have an effective role in contributing to the development of the governorates. “The problem boils down to the lack of experienced and qualified people in these councils,” he added.

“Governors should be more concerned with the investment areas in governorates,” Constitutional Law Professor Salah Fawzi said, stressing that they should make a plan to develop their governorates especially the sport centers to protect youth from political polarization.

The governor also has a security responsibility within the governor, assisted by the security department. He should also adopt the security plan for the governorate, Fawzi added. Moreover, he advised the new governors to set time for a weekly meeting with citizens in order to listen to their complaints and solve them.

Local Administration Committee member Mohamed Attia al-Fayoumi told Egypt Today that governors have a great responsibility waiting for them, pointing out that “the problem of garbage must be resolved quickly, and should be dealt with decisively. …The most important thing that the citizen should be satisfied with the new governors’ performance.”

According to the names published by official statements, five governors will remain in their posts, while former Damietta governor Ismail Taha was transferred to the post of Kafr al-Sheikh governor.

After swearing oath, the newly appointed governors and their deputies met with President Sisi, who ordered them to focus on meeting people’s needs and curbing unaffordable high prices in the local markets, according to a Thursday statement issued by presidential spokesperson Basam Radi.

The governors are set to take post during President Sisi’s second term; according to Egyptian law, the governors' terms end by the end of the Presidential term they were appointed in.


The new governors include: