Road to Raba’a: How MB leaders planned to threaten Egyptians 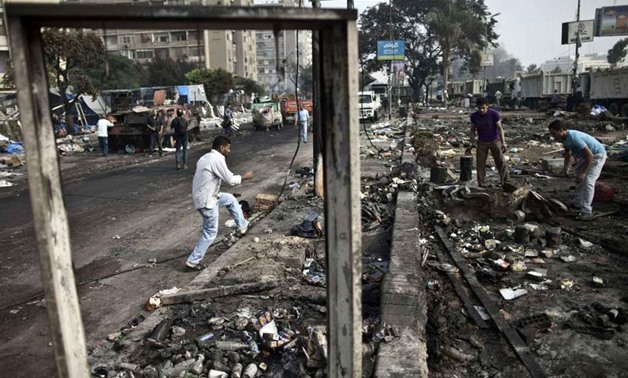 The debris of Rabaa al-Adawiya square in Cairo ( AFP/Getty)

CAIRO – 14 August 2018: Egypt witnesses the fifth anniversary of the dispersal of Rabaa and Nahda sit-ins where members of the outlawed Muslim Brotherhood had gathered and engaged into clashes with police and security forces on August 14, 2013.

Throughout the past five years, members and supporters of the Brotherhood which had been designated as a terrorist organization in December 2013, spread lies and allegations worldwide in a malicious attempt to claim that the Egyptian authorities and the incumbent regime are violating human rights.

In September 2015, a criminal court in eastern Cairo completed the two-year investigation into the dispersal events that took place in Rabaa Adawiya and Nahda squares.

The investigation concluded that the Brotherhood leaders were responsible for the violence that happened during the dispersal, such as MB Supreme Guide Mohamed Badie, Guidance Bureau leaders, Mohamed Morsi’s son, former Islamist parliamentarians and members of the Islamic Group and the Construction and Development Party, most prominently Tarek al-Zomor and Assem Abdel Maged.

The judicial investigations revealed that the most violent events were committed by MB supporters before August 14, 2013, which forced the authorities to apply the security option rather than reach a political solution.

June 21, 2013 was the first day of a violent series of clashes between the MB and the state institutions and people. According to the prosecution, the MB called for a million-man demonstration to terrorize the citizens, which had criticized the Brotherhood-led regime under the rule of Mohamed Morsi.

In May 2013, Brotherhood leaders agreed to foil the June mass protests, so they sought the help of the Islamic Group. In early June, the Islamic Forces issued a statement calling for a million-man demonstration on June 21 at Rabaa Square. During that demonstration, the MB and Islamic Group supporters had threatened the state institutions.

The Rabaa al-Adawiya sit-in was primarily forged by former Muslim Brotherhood-affiliated President Morsi supporters and sympathizers in support of his legitimacy.
Damage to the surrounding area as a result of the dispersal amounted to LE 50 million ($2.8 million).

Why did the army interfere in the June 30 revolution?

The one-year rule of the Muslim Brotherhood in Egypt showed how Morsi lacked a basic understanding of Egyptian political dynamics, and that is why he was unable to complete his term in office.

Morsi could not accomplish any progress in dealing with Egypt’s internal and external challenges, from minor domestic challenges to the external threats facing the government.

In 2012, Egyptians had high expectations after the 2011 revolution. Morsi was manipulating the political scene by appointing his affiliates in all government organizations and institutions, giving them privileges, enabling terrorist groups to expand in Sinai, threatening the Egyptian national security and working hard to “Brotherhoodize” the Egyptian civil state.

On July 1, Egypt’s Supreme Council of the Armed Forces (SCAF) issued a statement titled, "The Final Hours", which read: "We swear to God that we are ready to sacrifice our blood for Egypt and its people against any terrorist, extremist or fool."

Former first lady Gehan Sadat was shocked when she saw her husband’s murderers honored and respected by Egypt’s then-President Morsi.

After the success of the security forces to disperse the Brotherhood sit-ins in Nahda and Rabaa al-Adawiya in August 2013, Brotherhood leader Beltagi threatened Egyptians to continue supporting terrorist groups in Sinai if Morsi was not reinstalled as the "legitimate president" of Egypt, according to a video circulated on the internet.

On Dec. 14, 2016, Sisi said, “I have personally followed up on all recommendations emanating from this conference and I used my constitutional powers to issue pardons for a number of detained young people as a first batch, to be followed by others. I met with the committee that was formed to examine the cases of the detainees and got an understanding of its efforts.”

Until this moment, hundreds of young detainees have been freed after showing good intentions to interact with the Egyptian society and state.